There are multiple versions in the Model S lineup, badged Standard Range, Long Range and Performance with the Standard model using a 75kWh battery and the other two models using a 100kWh battery. Essentially, the higher the number, the longer the Tesla’s range and better the performance.

The slowest Model S, the Standard Range, can still hit 60mph from a standstill in 4.0sec, a more than respectable time for a big saloon car. The rest of the range gets quicker still, with the Long Range model taking 3.7sec for the 0-60mph sprint and the Performance covering the same increment in 3.0sec dead. Engage the £8700 Ludicrous Mode – an almost secret setting in the infotainment system that triggers a warp speed-style animation to appear before it’s engaged – and the top-spec Model S will accelerate from 0-60mph in 2.4sec.

Tesla’s CEO, Elon Musk, wanted to create a car whose performance could match that of the McLaren F1 – a car Musk used to own in his earlier entrepreneurial days. Not only has he achieved that, but the Model S has rather trounced the F1’s oft-quoted 0-60mph time of 3.2sec, going a full 0.8sec quicker. 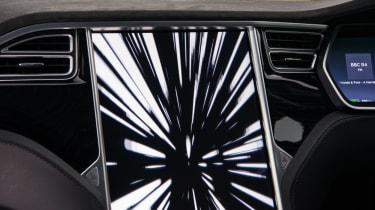 The acceleration the Model S is capable of is most astonishing at low speeds, and particularly off the line where it shoots off without any fuss or wheelspin, just a significant jolt forwards. It loses some of its impact while on the move, but the Model S can still pile on the speed at a respectable rate on to a limited top speed of 155mph for the entire range.