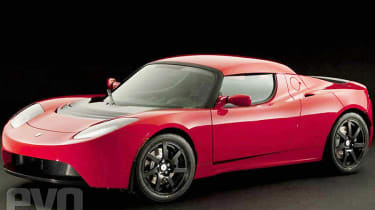 Tesla has unveiled its Roadster Sport. It’s a more powerful version of the standard electric Roadster, which is already pretty brisk.

The Sport is set to boast 15 per cent more than the regular Lotus Elise-based Roadster’s 248bhp, meaning around 285bhp from 4500rpm. The key figure with the AC motor-equipped Roadster, though, is torque. There’s no word on how many extra lb ft will be on tap, but the stock car’s 280lb ft from zero revs already ensures near supercar levels of acceleration.

Tesla is claiming a 0-60mph dash of 3.7sec for the Sport; 0.2sec quicker than claims for the Roadster, which we managed a 5sec sprint in during our How Fast? feature. The 120mph top speed is likely to remain the same, as will the bonkers 14,000rpm redline.

News of the Sport comes as Tesla apparently reaches profitability, a real milestone for a company this fresh. If you want to help the brand expand further, then set aside around £100,000 for the Roadster Sport, which will cost 112,000 euros on the continent.Follow evo on Twitter for the latest performance car news