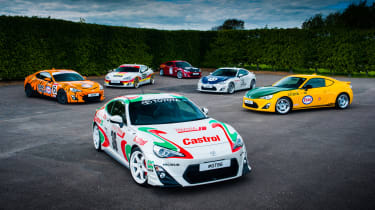 No sooner has Nissan applied a retro livery to its GT-R LM Nismo racer, Toyota has also delved into the past to brighten up its fleet of Goodwood-bound GT86s.

Taking inspiration from five decades of sporting Toyotas, the six GT86s will be available for public test drives up the hill on the Goodwood Festival of Speed’s Moving Motor Show on June 25.

Each livery holds historical significance for Toyota. The sextet begins with a yellow GT86 with a green bonnet. The colour scheme is inspired by the Yatabe Speed Trial Toyota 2000GT of 1966 – a car that set multiple speed and endurance records at the Yatabe High Speed Testing Course in 1966. Toyota has even replicated the speed trial car’s blanked-off rear windows, while a set of classic-style alloy wheels significantly change the car’s appearance. 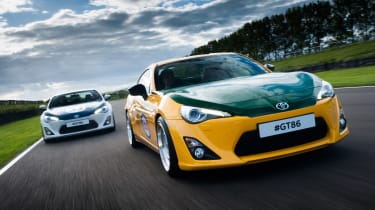 Another important 2000GT-inspired livery is also part of the group. Back in 1968, drivers Scooter Patrick and Dave Jordan raced a Carroll Shelby-run 2000GT wearing white paintwork and a blue bonnet – colours inexorably linked with the American tuning legend, albeit seen more frequently in striped form on Mustangs.

Contrasting bonnets were clearly popular in the 1960s and 1970s, as the red and black combination of Ove Andersson’s 1972 Toyota Celica 1600GT demonstrates. Ove enterered the car in the 1972 Daily Mirror RAC Rally, taking a class win. The Celica, in various generations, has since become one of Toyota’s most significant rallying entries.

The next GT86 is even more eye-catching. Resplendent in white with red, orange and yellow stripes, the car pays homage to the All-America Racing Team and TRD-prepared IMSA GT Celica of 1983 to 1985. While rarely seen in the UK, the colours are a significant part of American motorsport history. 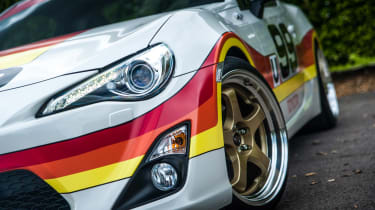 Even the TRD scheme struggles to compete with the next livery. If you were a rally regular in the 1990s, the white, red and green of Castrol-branded Toyotas is one of the most iconic themes ever to compete in motorsport. It graced two generations of Celica (as well as appearing on Supras in the Japanese GTC series) and looks equally at place on the GT86.

Another JGTC Supra wore the final GT86 livery – the tiger-striped Esso Ultron colour scheme. Cars thus attired raced from 1995 until 2006, and like the Castrol colours it’s one of many to appear in the Gran Turismo series of videogames.

Each car is strictly a one-off (though may well provide inspiration for some owners), each vinyl wrap applied by specialist Motor Mode and designed to work with the sports car’s creases and curves. Additionally, each dressed-up GT86 is lowered by 40mm and sits on appropriately retrospective Rota alloy wheels. A Milltek Sport stainless steel exhaust provides the finishing touch.

Following their Moving Motor Show debuts on the 25th, each car will then be put on static display at the Festival of Speed, supporting the GT86 Drift Experience.