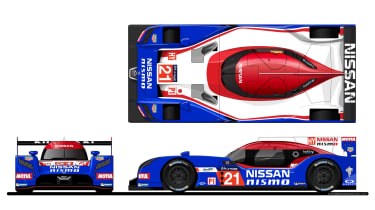 Racing liveries are one of the most emotive subjects in motorsport. Who doesn’t hold fond thoughts of Marlborough-swathed McLarens, Alitalia-striped Lancias or Gulf-hued Porsches?

Nissan is set to race once again with its own historic livery at this year’s Le Mans 24 hours, inspired by one of its most famous racing vehicles.

In 1991, Mazda took an historic victory at the Le Mans 24 Hours. Its 787B crossed the line in first place, marking milestones as both the first rotary-powered vehicle ever to win the race, as well as the first Japanese manufacturer.

The latter record could have been taken a year earlier however. With Mark Blundell at the wheel, Nissan’s R90CK set a qualifying time of 3:27.020, putting the Japanese car on pole position.

Sadly, Blundell, Julian Bailey and Gianfranco Brancatelli’s car retired during the race, but the car – and its red, white and blue livery have remained in the racing consciousness.

A quarter-century later, Nissan is once again aiming for top honours at Le Mans. Its GT-R LM Nismo is a very different vehicle, but it will wear the same livery as Blundell’s pole-sitting R90. 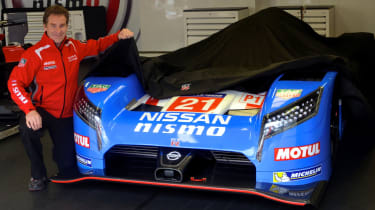 ‘Our racing heritage is hugely important to us,’ explains Darren Cox, Nissan’s global head of brand, marketing and sales. ‘Our 1998 car hangs on the wall at NISMO HQ in Yokohama as a reminder of our Le Mans podium and  the blue liveries of the Group C and IMSA era of the 80's and 90's are a firm favourite with the fans.’

Those fans might not even remember the striking colour scheme from Nissan’s 1990s efforts, but regular appearances in the Gran Turismo series of videogames – without which many of Nissan’s drivers wouldn’t be where they are today – mean they’re an indelible part of motorsport history.

Whether the front-wheel drive GT-R LM Nismo will follow suit is much less clear, but the team and fans alike will get a much better idea following the first official test day this Sunday. It’s the first time Nissan’s racer will run at Circuit de la Sarthe, and the first time it will square up to its major competition from Audi, Porsche and Toyota.

READ > Everything you need to know about the 2015 LMP1 cars