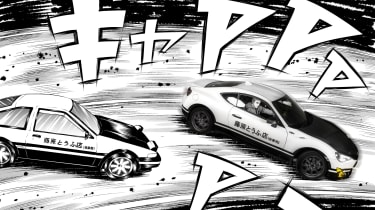 If you use the terms “AE86” or “hachi-roku” to describe 1980s rear-wheel drive Toyota Corollas, then you’re probably well aware of the manga, Initial D.

First published in 1995, the Initial D comic strip series tells the tale of a young fuel station attendant who delivers tofu for his father’s business every night in an old Toyota Sprinter Trueno, on the twisting roads of the local Mount Akina.

With years of practice before he’s even of legal driving age, the protagonist – Takumi Fujiwara – is the fastest driver on the mountain, and as the series develops, several drivers from across the country descent on Akina to challenge his title.

The series was later adapted into an anime television series in 1998 and thanks to the increasing popularity of drifting, it’s since become known worldwide. And it’s made that Sprinter Trueno – also known as a Toyota Corolla Levin in Japan, and the Corolla GT here in the UK – a cult hero. 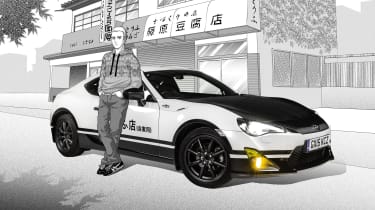 Toyota’s GT86 is a replica of that Initial D star car, complete with a white-over-black paint scheme, the Fujiwara tofu shop scrip along its flanks, and a set of yellow-tinted foglights to replicate the Cibie spotlights of the manga AE86.

Best of all, Toyota has gone to down on the car’s specification. The wheels are a set of 17-inch RS Watanabe F8 alloy wheels – larger than the originals, but otherwise identical, while a TRD suspension system, Fujitsubo exhaust, and Cusco strut brace replicate the lightly-modified exterior of the original.

Even the engine cover has been painted silver, replicating the ‘Silver Top’ cam cover of the 4A-GE 1.6-litre twin-cam found in the Trueno.

One further detail helps lend the car some authenticity – UK-based manga artist, Sonia Leong, has designed a series of images that put the GT86 into an Initial D-style scenario, replicating the original comic artwork.