A three-strong sports car lineup may still happen, but any new Toyota MR2 looks likely to slot in between the GT86 and Supra 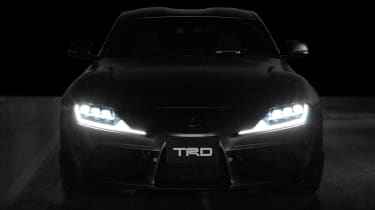 Driving enthusiasts hoping for an even smaller sports car to sit below Toyota’s GT86 will have to wait for a ‘dramatic breakthrough in technology’ if it’s to happen, according to Toyota Gazoo Racing chief Tetsuya Tada.

Speaking to evo at the 2019 Geneva motor show, Tada confirmed that while he’s still keen to give Toyota the three-strong “three brothers” sports car lineup first mooted a couple of years ago, current market conditions make it very costly to develop smaller cars – particularly when those cars are niche products like sports cars.

> Click here for our first drive of the new Supra

‘I believe most people are looking forward to the smallest of the “three brothers”’ said Tada. ‘And when people say the smallest they expect it would be the most affordable. But in reality coming up with a compact small sports car is quite difficult.’

Tada explained that because safety and emissions regulations remain the same at all points in the market and that the physical number of components that make up a smaller car are very similar to a larger one, the chance of making a profit on such a car is low.

That, unfortunately, makes a production version of Toyota’s S-FR concept from the 2015 Tokyo motor show highly unlikely – and means that any revival of the MR2 is likely to sit above the current GT86 in Toyota’s lineup, rather than directly replace the MX-5-rivalling third-generation MR2.

Incidentally, the GT86 itself is one reason Toyota may struggle to supply a smaller, more affordable sports car.

‘In the actual market there are now plenty of second hand GT86s that are fairly compact,’ he said, ‘so in order to compete with these second-hand cars it’s difficult to come up with a smaller version.’ The subtext? If you want an affordable Toyota sports car, then GT86s start from about £10k…

Tada wouldn’t elaborate on rumours the GT86 itself wouldn’t see a second generation, but did express that he sees it as an important product for Toyota – not least as a springboard to the Supra.

‘GT86 was a car to remind our Toyota customers of the fun of driving sports cars, and we also hope that these drivers would improve their skills in driving a sports car,’ he said.

‘In the aircraft world it’d be equivalent to a training aircraft. There have now been many years of “training”, and we’ve been receiving feedback from these customers that they’re now ready for new horizons, so Supra is an answer to these questions.’