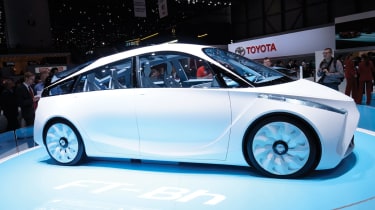 Toyota has unveiled its super-lightweight FT-Bh concept at the Geneva motor show. The concept behind the car is one of efficiency, maximising the potential of a small hybrid drivetrain, showing the direction in which the company wants to move its B-segment (Yaris sized) car.

The two-cylinder 1.0-litre petrol engine coupled with a full hybrid drivetrain can average 134.5mpg, producing just 49g/km of CO2. A number of things help give the FT-Bh this impressive figure, including the use of high-tensile steel, aluminium and magnesium in the construction saving a significant amount of weight, measuring in at just 786kg.

The concept also makes use of some state-of-the-art aerodynamic techniques, using air curtain intakes on the front, air-stream alloy wheels, a pagoda-style roof with a dropped rear section and sharply cut rear end that incorporates an air outlet slit and an underfloor spoiler to smooth the flow of air away from the vehicle. All these measures bring the car's drag co-efficient down to 0.235 - far lower than the current average which is nearer 0.30 cd.

FT-Bh rides on narrow, large diameter 145/55R18 low rolling resistance tyres, which make a significant contribution to bringing down the road load and driving resistance, with no loss of grip or traction.