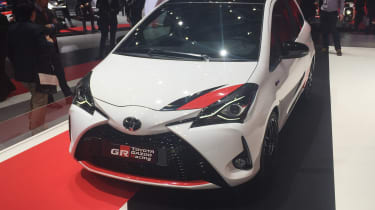 We've already been for a drive in Toyota's new Yaris GRMN hot hatchback, but the car we drove still had heavy disguise over the front and rear. Now, UK punters and evo journalists alike will be able to catch their first glimpse of Toyota's first hot hatchback in a decade, undisguised, at the Carfest North event in Cheshire this weekend (July 28-30).

Potential buyers will have to act fast if they want to grab a spot on the reservation list, though. The car won't debut in the metal until the day after online sales reservations start, and demand is likely to be high for this little car - especially as only 100 cars will be bought to the UK, out of a total 400 coming to Europe.

Toyota has taken a slightly different path to its rivals with the launch of the Yaris GRMN. First of all, there's the name. GRMN isn't exactly catchy - but it stands for 'Gazoo Racing tuned by Meisters of the Nurburgring'. Yes, seriously.

Under the hood, instead of the typical 1.6-litre turbocharged powerplant, Gazoo has developed a 1.8-litre four-cylinder using supercharging for its forced induction.

The company quotes a power output of “around 210bhp”, and Toyota has chosen to send that power to the front wheels (there’s no WRC-style all-wheel drive, sadly) through a six-speed manual transmission. While the power output is similar to its rivals, the Japanese firm suggests both the 0-62mph time and its 50-75mph sprinting ability in fourth gear are both best-in class. Toyota projects a 0-60mph time of 6.3-6.5 seconds, while top speed is limited to 143mph. 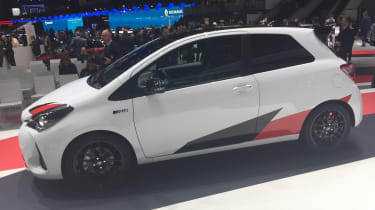 Hot hatchbacks live and die by their handling however, and with the standard Yaris offering far from class-leading abilities in this regard, Gazoo Racing will have its work cut out. The signs are promising: The Yaris GRMN gets additional chassis bracing and reinforcements to firm up its shell, including a front suspension tower brace. There are also shorter, stiffer springs for a lower ride height, Sachs-developed dampers and a thicker front anti-roll bar.

The setup has been tuned at the Nurburgring - GRMN stands for Gazoo Racing Masters of Nurburgring, an arena in which the team has competed for many years - and a Torsen limited-slip differential is used to keep the front wheels in check. Larger-diameter ventilated discs and four-pot front calipers are used to halt proceedings.

Styling too is an area where the regular Yaris needs work, particularly given the GRMN is based on a newly, and slightly awkwardly facelifted version of the hatch, also making its debut at Geneva.

Supplied in three-door form only, the GRMN gets a set of 17-inch BBS multi-spoke alloy wheels wrapped in 205/45 R17 Bridgestone Potenza RE050A tyres. Both front and rear bumpers are of a new design and at the rear there’s a diffuser element with a centre-exit exhaust pipe. 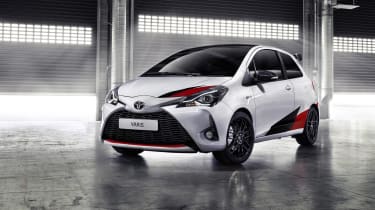 There are changes inside too, including a set of bewinged Gazoo Racing-branded adjustable bucket seats, a small-diameter steering wheel snatched straight from the GT86 sports car (a car, incidentally, now looking slightly under-powered and under-tyred against the Yaris GRMN) and the obligatory aluminium-faced pedals and aluminium gearknob.

The GRMN is Toyota's first hot hatchback since the Corolla T-Sport disappeared in 2007 - and the first dedicated performance Yaris since the Yaris T-Sport went off sale in 2005. As well as obvious rivals such as the Ford Fiesta ST - soon to be sold with only three cylinders - and Peugeot 208 GTi, the Yaris should also compete with another WRC-inspired hot hatch due soon - Hyundai's i20 N Performance, a car evo learned of at the Paris motor show.

The Toyota Yaris GRMN is on display at the Geneva Motor Show, sitting alongside the i-TRIL Concept – an electrically-powered, three seater vehicle with ‘Active Lean’ technology. Also on display is a full lineup of Toyota Gazoo Racing’s 2017 competition cars.