The hot Toyota GR Yaris is finally on sale, and you can reserve your car from the comfort of your own home 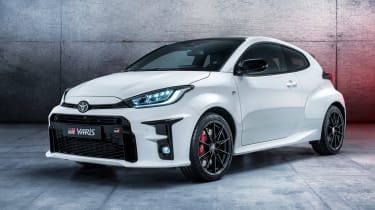 Toyota launched its much-anticipated GR Yaris at the start of the year, a turbocharged, all-wheel-drive, three-door hot hatchback that will be the second model in Toyota’s high-performance GR range, and the homologation model for its 2020 WRC world rally car. With UK prices starting from £29,995, order books are now open, and Toyota’s ensuring that the current global situation doesn’t get between you and your dream hot hatch...

In order to help buyers avoid Covid-19 restrictions and maintain social distancing, the marque has launched an online pre-ordering system, allowing you to reserve your car, for the fee of £1500, without leaving your sofa. First cars are expected to hit UK soil in October, and will set you back from £29,995, or £33,495 if you opt for the Circuit Pack.

Power is transmitted via a six-speed manual transmission (there is no automatic or dual-clutch option available) to a four-wheel-drive system that distributes torque between the axles via a central coupling, as opposed to an on-demand Haldex-style system found in other small all-wheel-drive hot hatchbacks such as the late Audi S1. Torque split between the axles is variable depending on a selected driver mode, with Normal, Sport and Track modes dividing drive 60:40, 30:70 and 50:50 respectively. 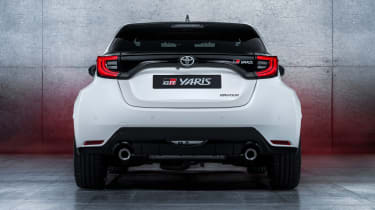 Optional Torsion limited-slip differentials on both front and rear axles are also available bundled in a Circuit Pack that combines these with a different set of 18-inch forged alloy wheels wrapped in 225/40 R18 Michelin Super Sport tyres, and a more track-oriented suspension tune.

Despite sharing a name with the standard Yaris hatch, this three-door-only model features a bespoke body that’s significantly wider and 91mm lower than the standard five-door model. The new body has been designed with rallying in mind with new suspension pick-up points, a wider track and a double-wishbone rear axle all bespoke to the GR Yaris. The body itself incorporates lightweight materials to keep the weight down to 1280kg, with a carbonfibre roof skin and aluminium doors, bonnet and boot lid.