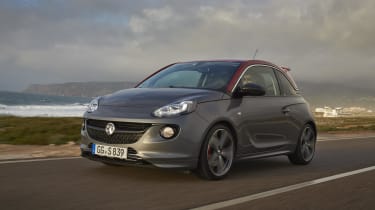 Vauxhall's Adam finally has a competitior for the Abarth 500 and Mini Cooper in the shape of the Adam Grand Slam.

Formally known as the Adam S, the Grand Slam was revealed in UK trim at the Autosport Show, and features a 1.4-litre turbocharged petrol engine with 148bhp.

Torque of 162lb ft gives it 70 per cent greater urge than the naturally-aspirated 1.4 also available in the Adam range, while a six-speed manual gearbox – also fitted to the recently-introduced Adam 1.0, should make the most of the extra grunt.

Official performance figures of 8.5sec to 62mph and a 124mph top speed mean the Grand Slam doesn’t quite defeat its rivals in this area, but the numbers are similar enough that on-road performance should be in the right ballpark.

Vauxhall also says the car's performance has been geared towards flexibility and response rather than headline numbers. Additionally, a stop-start system helps the Grand Slam achieved European combined economy of 47.8mpg. 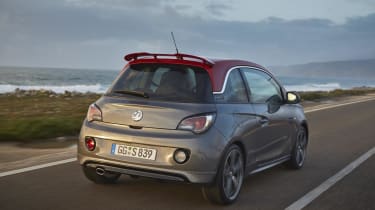 The Adam's compound crank rear axle - essentially a torsion beam - has been uprated, as have the springs and dampers all round. The Grand Slam also uses the braking system from the last-generation Corsa VXR, complete with 308mm and 264mm discs front and rear.

Unfortunately, the Recaro seats previewed on the Adam S’s debut at last year’s Paris motor show will not reach the UK for cost reasons, though other sporty interior touches will make it to production unscathed.

Pricing starts at £16,995, which is actually a little more than its rivals from Abarth and Mini – a similar amount would secure you an Abarth 595 Turismo with 158bhp or a £15,300 Mini Cooper with room for several options.

The real test will come once the Adam Grand Slam hits the road. Orders are open now, with first deliveries beginning in March.