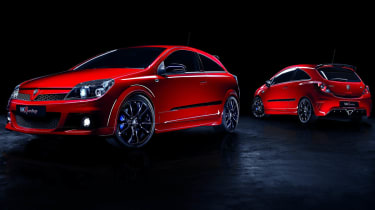 Vauxhall is belatedly celebrating its BTCC success in 2008 with a couple of extra fiery hot hatches.

Both Corsa VXR and Astra VXR get red and black bodies to mimic the VX Racing Team colours, bigger gloss black alloys (18in Corsa, 19in Astra) and a chunky rear diffuser.

There’s a host of interior tweaks too, with VX Racing kickplates, a splattering of logos and full leather Recaros as standard.

Mechanical changes are limited to an optional Remus exhaust system, which turns the engine note well past 11 (and adds some amusing pops and bangs to your acceleration) as well as adding 20bhp. It’s available for £720 on the Astra and £410 if you choose the Corsa, with a range of other official performance upgrades discounted too.

The Corsa and Astra VX Racing Editions cost £17,425 and £21,445 respectively, with orders starting now. There’ll be a combined total of just 888 built – the number neatly tied in with the name of VX Racing’s preparation company, Triple Eight Engineering.