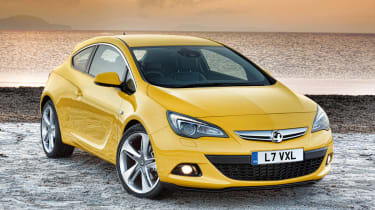 Vauxhall has unveiled its new Astra GTC, a sleek rival to the Volkswagen Scirocco and Renault Megane Coupe. It’s the three-door version of the Astra hatchback, and as is increasingly common with this class of car, it gains a coupe moniker and much sportier styling than its more practical sibling. It bears a huge resemblance to the Vauxhall Astra GTC Paris concept of 2010, its ‘signature blade’ sice crease running in the opposite direction to the five-door Astra’s. The most exciting news for us lies under the skin, though. The Astra is already dynamically great but the GTC aims for greater driver involvement still. The high performance strut (HiPerStrut) anti-torque steer system from the Insignia VXR is fitted to help transfer the Astra GTC’s power through its front wheels, while the acclaimed Watt’s link rear suspension that makes existing Astras so good to drive remains. Compared to the five-door, the GTC also rides 15mm lower, has a 10mm longer wheelbase and 40mm and 30mm wider tracks front and rear, respectively. As well as improving stability and body control, it also accommodates the option of 20in alloy wheels. Vauxhall’s FlexRide adaptive damping is also on the options list, with Standard, Tour and Sport modes to tweak the car’s chassis to your needs. There are four engines for now, one diesel – a 163bhp 2.0-litre, which combines an 8.9sec 0-62mph sprint with 57.6mpg and a 700-mile range – and three petrols, ranging from a 118bhp 1.4-litre turbo to a 178bhp 1.6-litre turbo, which is the performance choice until a circa-300bhp turbocharged Astra VXR joins the range in 2012 to combat the Renaultsport Megane 250 and Ford Focus ST. Vauxhall Astra GTC prices will kick off at £18,495 for the entry-level 1.4 turbo petrol, around £250 more than similarly powered Renault Megane Coupe but over £1000 cheaper than an equivalent VW Scirocco. Vauxhall’s 100,000 mile ‘lifetime’ warranty comes as standard. Vauxhall Astra VXR Arctic review and pictures Big Vauxhall Astra GTC Paris picture gallery

Why is the new Vauxhall Astra so good to drive?