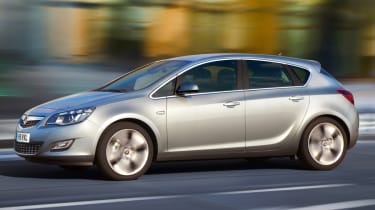 Eureka moments are ever more rare in the motor industry, as complication and regulation turn great minds to minutiae rather than the bigger picture. But somewhere in Rüsselsheim recently, a naked engineer may well have been seen bounding down the Straße in a state of undress, splashes of water trailing behind. For he had just dreamed up a rear suspension so simple in its cleverness, so obvious when wood is not obscured by trees, that you wonder why no-one has thought of it before.

It is fitted to the new Opel/Vauxhall Astra, which we have been allowed to drive in 178bhp, 1.6-litre turbo form as GM Europe engineers finish development ready for the range’s launch at September’s Frankfurt show. At a stroke, the suspension lifts the Astra’s dynamics to the level of sophistication found in a Focus or Golf.

So what’s the clever bit? All Astras up to now have had that cheap but adequate rear suspension known as a torsion beam, in which two flexibly mounted trailing arms are held together by a tough crossbeam whose resistance to twisting makes it act like an anti-roll bar. It’s cheap, light, space-efficient and can be made to work well, as hot Clios and Méganes best demonstrate. But setting it up to handle precisely calls for hard mounting bushes, which ruin the ride and transmit lots of noise. That’s where a Focus/Golf multi-link system scores, allowing more accurate geometry control with lower noise levels.

The new Astra still has a torsion beam. And it has soft, compliant bushes. But now the trailing arms’ rear ends are linked by a Watt’s linkage anchored to the floor in the centre, so the arms can no longer deflect laterally under cornering forces. This staggeringly simple idea gives the new Astra a steering precision (something greatly influenced by rear suspension) and a fluidity of cornering an Astra has never possessed before. It also rides smoothly and quietly; an encounter with a previous Astra immediately afterwards felt like driving a 100,000-mile clunker.

All the multi-link advantages, then, at least as perceived in a mainstream hatchback, but at less cost and with a roomier boot. Other niceties are rebound springs to help roll stiffness without generating lateral wobble, and an electric power steering motor on the rack instead of the column to lose the feeling of springiness you get when the column is being twisted by the motor.

The engine is smoother and quieter too, thanks to improved mountings and the reduced resonances of a much stiffer body. And, mirroring what’s available in a Golf, you can have FlexRide adaptive dampers which offer a choice of three settings: Standard, Tour (supple, with lighter steering) and Sport (the opposite, plus a keener throttle and instrument lighting changed from white to red).

Inside, the cabin is much more modern and sophisticated. Outside, the shape is smooth, rounded but sharp in its detail, lithe in a way the old one was not. But it’s between the rear wheels that the real miracle has happened.