We sample Vauxhall's lighter, more compact Astra in petrol and diesel guises to gauge its chances against the Ford Focus and VW Golf 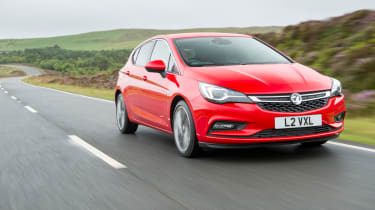 This is the all-new Vauxhall Astra, built in Britain and up to 200kg lighter than its predecessor. The body shell weight alone has been reduced from 357kg to 280kg and another 50kg has been removed from the chassis. It is also shorter by 5cm, and lower by 2.5cm, yet interior space has increased.

Perhaps the biggest news for Vauxhall is the fitment of OnStar. This is effectively a concierge service that can do everything from tell you what’s wrong with the car if a warning light comes on, to directing the emergency services to you in an accident. Or you can simply find the nearest Burger King – you just press a button and a voice appears in the car. You get a year’s free subscription and then it costs £80p/a but that also includes pan-European breakdown cover. You can also download an app to your smart phone, which allows you to do things such as remotely lock or unlock the car. The new Astra is also a Wifi hotspot, has heated rear seats and has both Apple CarPlay and Android Auto.

We tried three engine variants. The first was the turbocharged 1.4-litre petrol Ecotec, which stumps up 148bhp and 181lb ft of torque. This felt the lightest and most nimble of the cars to drive and the engine was keen up to about 4500rpm. Attempts to rev it out to its limiter some 2000rpm later (or even to where it produces peak power between 5000 and 5600rpm), sadly felt very laboured. To that extent the 1.6 CDTi engine with 134bhp and 236lb ft seems like the better option – if you’re relying on low down torque in the petrol then you might as well have the turbo diesel which has even more low down torque and actually revs as far as you want to rev the petrol. For a diesel it is also a decently quiet and refined engine. The little three-cylinder turbocharged 1.0-litre engine was easily the most characterful powerplant, zinging through the revs and making a lovely noise, but sadly with only 104bhp and 96lb ft it is just too gutless to really make it a viable option for anyone looking for some fun. Although neither was available on the launch, we’d certainly like to try the 197bhp 1.6-litre petrol and there is also a BiTurbo diesel with 158bhp.

The new Astra feels like a smaller car than some of its rivals and that is a good thing down a B-road. The ride is rather bobbly through town and not the slickest over sharp bumps, but down a B-road it is possible to get a nice flow going with the whole car feeling quite light on its feet. The shift of the six-speed manual is pleasingly smooth and positive although the clutch could be more distinct, and the pedals aren’t particularly well placed for fancy footwork across the brake and throttle. In SRi spec you get a Sport button, which sharpens the throttle and adds a bit of weight to the steering. The latter is welcome, the former goes just a touch too far. Overall the steering is reasonably accurate but hardly brimming with feel.

The new Astra isn’t a bad car but it isn’t a particularly memorable car to drive either. What is encouraging is the feeling of lightness and compactness, which are excellent starting points for future hotter versions. Pop a sportier petrol engine under the bonnet, tweak the springs and dampers and you might have a rather good hot hatch.

Vauxhall names its main rivals for the Astra as the Ford Focus and the Volkswagen Golf. However, the Kia Ceed with its seven-year warranty shouldn’t be left out of the equation and Renault has just unveiled a very good-looking new Mégane.

From a driving perspective, one of the most important additions to the new Astra is the optional (£995) LED matrix headlight system. We tried this out on the launch and, just like the VW system, the way that it only dips the necessary portion of the full beam, leaving the rest of the road fully illuminated is very impressive. You still need to have your wits about you to avoid blinding cyclists and pedestrians, but with other traffic it seems to work pretty faultlessly as we didn’t once encounter an angry flash from oncoming drivers.