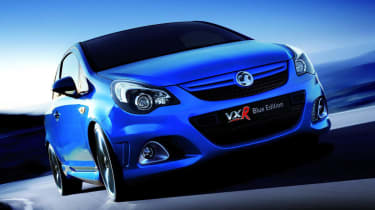 Vauxhall has revealed a new version of its Corsa VXR hot hatchback. The VXR Blue Edition brings the regular Corsa’s recently styling update to the range’s hottest model, with a new look for the front end and a bright Arden Blue paintjob, which is echoed with blue detailing inside the car. The engine remains the same, a lightweight 1.6-litre turbocharged petrol unit with 189bhp and 170lb ft of torque (with 192lb ft available on overboost). It’s enough to whisk the 1.2-ton Corsa to 60mph in 6.8sec and onto a 140mph top speed, very competitive figures in its class. On top of the standard Corsa's equipment, the VXR model gets lowered sports suspension, uprated brakes and a switchable stability control system, while the Blue Edition boasts the aforementioned paint, 18in alloys, tinted windows and some smart (and very comfy) Recaro seats. The Vauxhall Corsa VXR Blue Edition goes on sale next month, priced at £19,425. As well as offering a near-£500 saving over a similarly optioned VXR, it also undercuts rivals such as the Citroen DS3 Racing and Mini John Cooper Works by up to £3600. Vauxhall Corsa VXR v Mini Cooper S v RS Clio v Ibiza Read our review of the hotter Corsa VXR-R Want a VXR for less money? Corsa SRi review