Lighter, lower and more advanced than ever before, the latest Insignia looks far more appealing than its predecessor 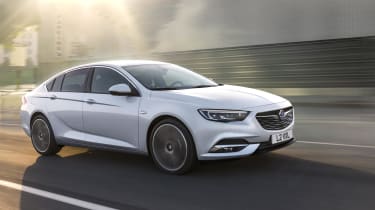 Would this car tempt you away from a BMW 4-series Gran Coupe or Audi A5 Sportback? Vauxhall hasn't declared either as direct rivals for its new Insignia Grand Sport, but the new model is the latest mainstream offering to try and tap into an increasingly premium market with sleek styling and high technology in an effort to maintain sales volume.

That said, with 30,000 units sold in the UK last year, the outgoing Insignia has suffered less than most rivals as buyers opt for premium marques over mainstream repmobiles in ever greater numbers.

The new car furthers its game with less weight, better aerodynamics, sleek new styling, updated technology - both mechanical and electronic - and a wide range of engines.

The mechanical changes could be most interesting to the Insignia Grand Sport's potential as a driver's car. It's available with all-wheel drive, and for the first time with proper torque vectoring at the rear axle. In fact, it's the same system used in the Ford Focus RS - a conventional rear differential is replaced by a pair of clutches that can meter out power to each rear wheel individually, controlled electronically depending on cornering and traction requirements.

FlexRide adaptive dampers should also allow a degree of adjustability to the Grand Sport's chassis, along with the steering, throttle response and (on automatic models) shift points, via Standard, Sport or Tour driving modes. Even the ESP system varies according to driving mode, promising slightly more relaxed intervention in Sport. 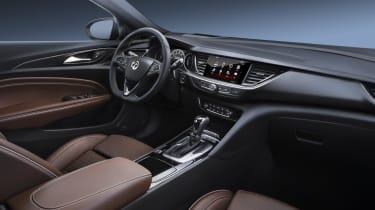 Precise details of the Grand Sport's engine range haven't yet been confirmed, but it's likely to use a mix of outgoing Insignia units revised for the new car, and all-new powerplants - all turbocharged. A new eight-speed automatic transmission joins the range, available only on the all-wheel drive models.

There are big changes to the body and chassis too, befitting the all-new platform. Styling has been influenced by the recent Monza concept, while the fastback-style look boasts a low drag coefficient of 0.26 - a figure Vauxhall says is class-leading (but does lag the 0.24 Mercedes-Benz C-class and 0.23 Audi A4).

More significant still are weight savings of up to 175kg compared to the current Insignia (which sits in the 1500-1600kg range), 60kg of which has been lost from the body-in-white alone. The proportions have changed too, with a 29mm lower roofline, a 92mm longer wheelbase, shorter overhangs and an 11mm wider track. In the cabin (which looks like a significant step forward from the old Insignia) the driver sits 30mm lower than before.

So will it tempt buyers away from their premium products? That's a hard call to make, and despite an ever-improving lineup the Vauxhall badge still carries some baggage. But if it drives like it looks, the Insignia Grand Sport will be off to a good start.