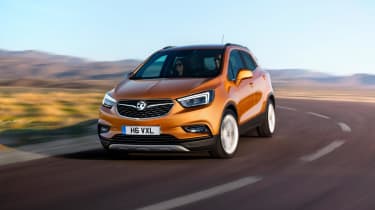 Ah. This is ‘classic’ Vauxhall, in that when it comes to the dynamic side of its chassis make-up – such as its cornering abilities, steering feel and resistance to understeer – it’s not that great at all. The steering on the Mokka is oddly lifeless and way too light, making it difficult to understand what the front tyres are doing.

Although, if you’re driving quickly, you can probably hazard a good guess – they’ll be understeering. To be fair to the Vauxhall, that’s a trait more common under power, as the grip levels otherwise are pretty good, as is body control. Therefore, keep it clean and tidy and the Mokka’s compact footprint comes into play, making it reasonably swift. It’s safe in the road holding takes, though, rather than exciting.

We can forgive the Mokka for its substandard handling - a B-segment crossover is not necessarily meant to be a fully-fledged driver’s car. However, that’s no excuse for a poor ride and the Mokka does not ride well. The Skoda Yeti, Renault Captur, Nissan Juke and Peugeot 3008 prove how it should be done. There has been an improvement over early Mokkas but it's still too bouncy for something that rides high on chunky tyres.

We’d recommend sticking with front-wheel drive. Adding power to the rear-axle harms not only performance but economy and emissions. It’s highly unlikely that anyone would ever take the Mokka off-road and all-wheel drive models are hardly scintillating to drive on twisty routes. If you did venture off the tarmac, it is worth noting that forward visibility is very good, thanks to the high driving position, but the high window line and sloping roof make rearward visibility poor.