Following its reveal at Pebble Beach in 2018, the US hypercar can now be seen in action 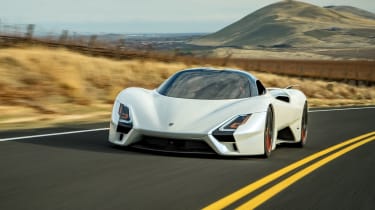 Remember the SSC Ultimate Aero? It was the American-built hypercar that, back in 2007, briefly stole the title of world’s fastest production car away from the Bugatti Veyron by recording a two-way average speed of 256.18mph. The Ultimate Aero’s successor, the Tuatara, was first announced in 2011, first shown as a concept at the 2013 Dubai motor show and unveiled in production form early in 2018. Now its maker has released a video of the model on the road.

With SSC aiming for the rather ambitious goal of a 300mph top speed, the new car ought to have the specs to match. A mid-mounted, twin-turbo flat-plane-crank 5.9-litre V8 pushes up to 1750bhp to the rear wheels through a seven-speed automated manual gearbox. The car also features a carbonfibre chassis and body, and has a dry weight of 1247kg and an impressive drag coefficient of just 0.279 – both claims better than the Koenigsegg Agera (which currently holds the production car speed record) and Bugatti Veyron.

SSC recently said: ‘Production of the Tuatara is ready to begin, with pre-orders currently being secured by those who wish to own this next-generation hypercar.’ Pricing information hasn’t been announced. However, being such a limited model with just 100 in the pipeline, we can’t imagine it’ll be cheap.

In November 2017, Koenigsegg’s Agera RS took the crown of world’s fastest production car, with a staggering two-way average speed of 277.9mph. Factory test driver Niklas Lija put the car’s 5-litre turbocharged V8 to good use, hitting over 284.6mph in one direction and smashing the Veyron Super Sport’s previous speed of 267.8mph. With the possibility of VAG-backed Bugatti also working on a model to beat this record behind closed doors, SSC certainly has its work cut out…