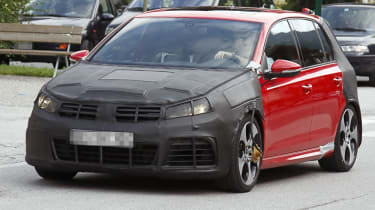 Volkswagen’s Golf R has been spied out testing.

It’s the hardest and most powerful production Golf yet, despite downsizing from the VW Golf R32’s 3.2-litre V6 to a 2-litre four-cylinder engine.

The unit in question is essentially the same as the one in the mk5 Golf GTI, with a larger turbo cranking the power up to at least the 261bhp of the VW Scirocco R. The team behind the R-range are keen to wind the Golf up a notch further, though, with around 280bhp likely.

That’s to accompany another difference from its Scirocco sibling – the Golf will be four-wheel drive, with the ‘Roc’s power going through the front two wheels only. The coupe does 0-62mph in 6.4sec; expect the more potent (and more planted Golf) to do better and potentially post a sub-6sec time.

It’ll need to if it’s to compete with perhaps its most natural rival, the Ford Focus RS. The Blue Oval’s hardcore hatch is the real-world performance car of the moment, combining front-wheel drive and 300bhp with blistering point-to-point pace.

The Volkswagen Golf R will have a job on its hands trying to compete, but we eagerly look forward to seeing how it’ll do. Keep your eyes on evo.co.uk for more information.