Just the right blend of fun and functionality 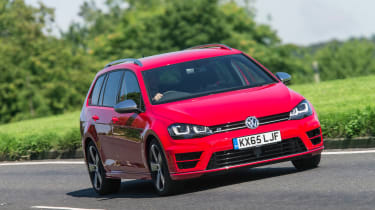 The Golf R Estate feels easily just as rapid as its hatchback cousin, with its 0.2-second drop in its 0-62mph time (it’s now 5.1 seconds) being almost imperceptible.

It’s a very capable package coming close to even the likes of an RS4 for its outright 0-62mph time (the Audi takes 4.7 seconds). It's a mark of how capable the engine is that you're never far away from accessing strong performance, while the all-wheel drive system makes putting the R's power to the ground a trouble-free task.

These numbers translate to a brutish broadband-like shove from the engine which, when pared up with the R’s Haldex four-wheel drive system, turns the R Estate into a proper point-to-point machine.