Volkswagen’s Golf-based coupe is no spring chicken, but still proves its worth as a rounded, yet still entertaining package 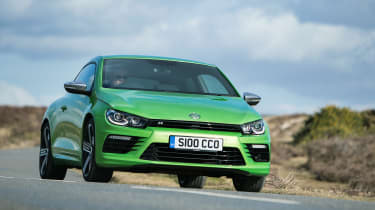 The VW Scirocco, despite being ten years old, is still on sale and the range is topped by the sporty R model. But, when the R was launched back in 2009 it wasn’t just the top of the Scirocco line-up it was VW’s performance flagship car.

The 306bhp four-wheel drive Golf R, that’s based on a platform that’s an entire generation ahead of the Scirocco R, now takes that mantle. But even though it’s dated, does VW’s Golf-based performance coupe still have the pace and poise to impress?

> Click here for our triple test between the VW Golf GTI, Peugeot 308 GTi by PS and Hyundai i30 N 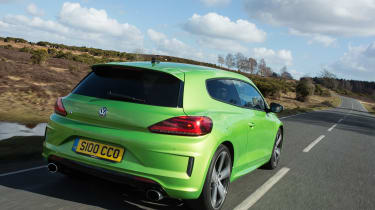 The third-generation Scirocco, a contemporary of the Mk5 Golf, isn’t shaped to accommodate the EA888 engine that’s found in the current Mk7 Golf GTI and R.

Volkswagen therefore finds itself building two performance oriented four-cylinder, 2-litre turbo engines; the Scirocco R retains the EA113 unit that served in the pre-facelift model – and the Mk5 Golf GTI before that.

However, the Scirocco R has significantly more power than the old Mk5 Golf GTI. Where the hatch made do with 197bhp, the R has an impressive 276bhp. That’s still more than the current Golf GTI Performance and only just behind the special, but now defunct, Golf GTI Clubsport.

That means the Scirocco R is respectably fast, its 0-62mph time is 5.7sec for the manual version, while the DSG transmission cuts another 0.2sec from that time.

The Scirocco R is refreshingly old school in its approach to putting its power down. There’s no four-wheel drive system and no mechanical locking differential. But it’s not plain-old front-wheel drive, the R uses VW’s XDS pseudo LSD that employs the front brakes to try and evenly distribute torque across the front axle.

Unlike the current Golf R, the Scirocco gets VW’s Dynamic Chassis Control – adaptive dampers to you and I – as standard to complement its sports springs that lower the R 10mm compared to other models. 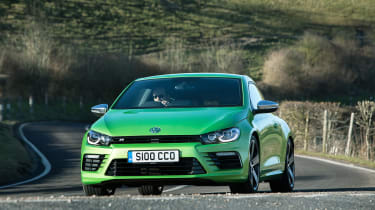 For a car with genuine super-hatch performance, its levels of comfort and its composed ride are noteworthy, especially when the car and (therefore) its dampers are in Comfort mode.

The quality of the ride does ring some distant alarm bells, though. In the plush Comfort mode the chassis can seem woolly and imprecise when pushed, but that’s perfectly reasonable – it is called Comfort after all.

The Sport setting does tighten the car’s responses, but not in a way that draws you into the process of driving it. There’s plenty of grip, the nose feels pointy and the XDS diff does a fine job of maintaining traction as you accelerate without feeling as though it interferes too much. 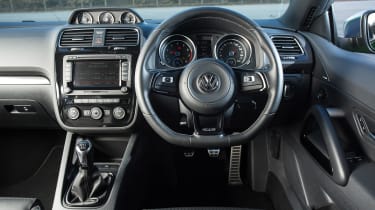 The steering, however, feels light and is low geared. As well as not being the kind of super-responsive set-up that we’ve become used to in modern hatches, it also doesn’t have an abundance of feel. Although messages from the front tyres are muted, grip is so good that you can easily rely on the front end to turn in without confirmation from the steering.

The EA113 engine doesn’t feel like a poor or outmoded relation. It’s responsive and pulls hard throughout the rev range, and with more character than many other four-cylinder turbo engines. The six-speed manual gearbox is rather notchy and, at times, awkward to use, which comes as a surprise given that most of the group’s manual ’boxes feel slick and well oiled. The optional (£1500) DSG transmission suits the R’s refined nature very well, although the plastic paddles do feel cheap to the touch.

If you’d hoped that the Scirocco, with its adaptive dampers and front-wheel drive layout, might be a cut price GTI Clubsport then you’re going to be disappointed. It’s far too tame to trouble that special GTI and, as a result, far from the top of the best handling front-wheel drive cars pile. However, you can’t help but be impressed by its ability to remain unflustered irrespective of the road or the weather. 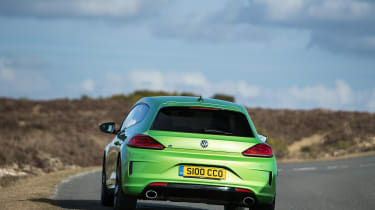 The Scirocco R’s biggest rival, another front-wheel drive coupe, the Peugeot RCZ R is now off sale, sadly. It was a heap of fun, and far more focused than the Scirocco.

That makes it difficult to find a close rival now. An Audi TT with anywhere near the sort of power of the R costs far more. The Toyota GT86 and Subaru BRZ might be far more interactive and expressive cars, but they don’t feel as premium as the Scirocco. Then again, they are quite a bit cheaper than the R.

They might not be coupes like the Scrirocco, but VW’s range of performance Golfs can’t be ignored. The GTI Performance, although down on power, is around the same money as the coupe yet its more modern platform gives it an edge dynamically. The Golf R, with 306bhp and four-wheel drive is just over £2000 more than the Scirocco R, but it’s leagues ahead in terms of performance and capability.