The Scirocco has a well-built and ergonomic cabin – as with most VWs it’s a refined space and there is little inherently wrong with it. However, in terms of design the Scirocco’s interior hasn’t aged quite as well as its exterior. It now lags behind rivals despite minor improvements over the years, and there are few features to surprise and delight. On a more positive note, there are very few complaints with the Scirocco's ergonomics - you sit low (pleasingly so, given the elevated driving positions of comparable hatchbacks), and the usual VW staples of clear instruments and slick controls are present and correct. 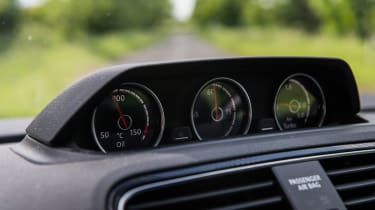 GT models and above are enlivened by a trio of dials sitting atop the dashboard – one of which is a useful oil pressure gauge. Cabin feel is improved by choosing one of the alcantara or leather trim options, though all Scirocco cabins are fairly dark in terms of trim - it's a choice of black trim or... black trim.

The Scirocco’s real downfall is in its tech; adaptive cruise control, city braking and other recent safety innovations are notable by their absence (though we admit that for some, these will probably be seen as benefits). In terms of infotainment the standard touchscreen system is outdated and lacks the plug-and-play nature that many buyers increasingly crave, but it otherwise works well enough.