In diesel form the Scirocco can achieve up to 67.3mpg (143bhp) with a manual gearbox. Perhaps that’s a little optimistic for most but a recent motorway jaunt saw the Scirocco TDI report an impressive 65mpg on its trip computer, so those figures aren't beyond the realms of possibility if you exercise restraint - or you're caught in endless M25 and M1 drudgery, as we were for that particular economy figure. It's a fun car that doesn't punish you too much in daily driving.

Stop-start traffic will see the figure drop to the high 30s but averaging 50mpg is achievable. CO2 emissions of 109g/km drop the basic diesel into VED band B so tax will only cost £20 per year. We should probably note that the latest Scirocco TDIs are not cars affected by the 'Dieselgate' emissions scandal, though we'd recommend those buying an older model to check their VIN numbers on VW's website to make sure. 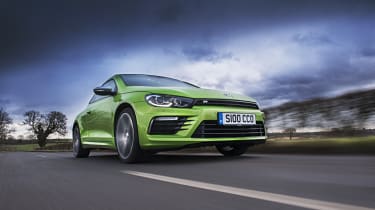 Petrol powered Sciroccos see a predictable drop in economy compared to the diesel models. The most frugal 1.4 TSI reports a combined figure of 52.3mpg. At the opposite end of the range, the Scirocco R still stops short of being a prolific fuel-guzzler – official combined economy of up to 35.8mpg and CO2 of 185g/km should keep running costs relatively low.

Make use of the performance and that number will drop sharply, though evo’s old Scirocco 2.0 TSI long-termer was respectably frugal, managing 34mpg during our tenure.