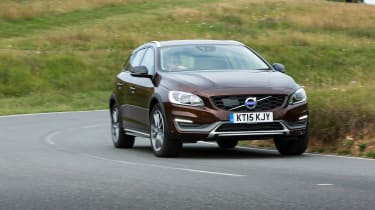 A more rugged, off-road orientated version of Volvo’s handsome D segment estate car – or, if you opt for the S60 Cross Country, its saloon.

The car follows other Volvo Cross Country models and indeed an industry-wide trend of offering raised, plastic-clad versions of conventional cars to bridge the gap between regular vehicles and the popular crossover options.

Arguably, Volvo itself started this trend with the original V70 XC launched in 1998 – a year before Audi’s similar A6 Allroad debuted.

The benefits for the driver largely amount to extra ground clearance, and the availability of all-wheel drive. For Volvo, it rounds out a surprisingly diverse range that also includes the hot-shoe V60 Polestar and ultra-frugal V60 plug-in hybrid.

As tested, the V60 Cross Country uses one of Volvo’s new Drive-E four-cylinder diesel powerplants. Eventually, the Drive-E range – in both diesel and petrol formats – will spread across the entire Volvo lineup, differentiated through power outputs alone and, where applicable, hybrid technology.

This D4 boasts 187bhp and 295lb ft of torque, a six-speed manual transmission, and a low 111g/km CO2 rating, with corresponding 67.3mpg combined economy figure. An 8-speed auto is available, which boosts economy to 70.6mpg.

It’s also front-wheel drive – the majority of buyers want the look, rather than the ability – but a four-wheel drive version is available.

As befits the Cross Country badging and implied off-road ability, the model sits 65mm higher than a standard V60, and only 9mm lower than the larger XC70. The benefit, says Volvo, is greater capability on rough roads or in difficult road conditions (regardless of the driven wheels). And, perhaps with a nod to Volvo’s family-car nature, the extra height makes it easier to get in and out of too.

Suspension is fully independent front and rear, with MacPherson struts up front and multi-link at the back. Four-wheel drive versions can vary torque front to rear by a full 100 per cent, via an electronically-controlled hydraulic clutch. 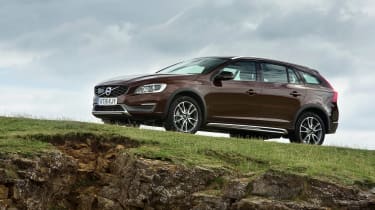 There are far worse places to begin a drive than from the cabin of a Volvo V60. The TFT instrument display is clear and informative, the cabin materials solid and easy on the eye, and the seats of the type you can buzz roughly into position within a few seconds, yet somehow remain comfortable in for many hours to come.

Driven briskly, rather than fast, the V60 Cross Country is a pleasant steer. The extra ride height hasn’t introduced excessive amounts of body roll, and ride quality feels little different from the standard V60 – itself a comfortable car even on broken surfaces.

The steering is light and direct, if not bristling with feel. The gearbox too is easy to work with, with a fluid action and light clutch. The engine they’re attached to is a gem, refined and punchy – it does become breathless if stretched, but there’s little point when its best work is done lower down the rev range.

The Cross Country’s driving characteristics won’t exactly have you crossing the country for the sake of it, but the easygoing drive, cosseting cabin and myriad safety features mean you’re equally unlikely to be stressed at the end of a long jaunt. An excellent family car and all-weather option, but Volvo's own Polestar is the entertainer in the range.

S60 Cross Country models are only available in upmarket Lux trim, at £33,695 for the D4 and £36,725 for the D4 AWD. As well as being more expensive, you’re realistically unlikely to see many on the road – Volvo admits that a rugged saloon is a niche market, and expects Cross Countrys to account for six percent of the current S60 range.

All models are well-equipped – alloy wheels, LED daytiming running lights, climate control, and cruise control are standard across the range. Navigation is also available, as is a wi-fi hotspot, and a full suite of Volvo safety systems. 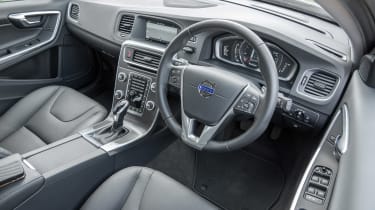 Volvo takes a relatively small slice of its market segment – as of June, year to date sales of the V60 were just 1711 units, lower than the Lexus IS, while the S60 saloon was below that of the just-launched Jaguar XE.

Unfortunately, this means many will overlook the Cross Country models in favour of more conventional premium vehicles like the aforementioned IS and XE, as well as the BMW 3-series, Audi A4 and the current market leader, Mercedes’ C-Class.

All could be considered rivals in a general sense, though if a stockier, jacked-up executive wagon is your vehicle of choice, the V60 Cross Country has only one true rival – the Audi A4 Allroad. The Audi won’t set your automotive world on fire either, but a range of frugal diesel engines, a quality cabin and elegant exterior mean it has the same qualities that make the Volvo appealing – plus the allure of that four-ringed badge.

Seat's Leon X-perience is also worth a look, even though it's not a direct competitor for the Volvo. Entry-level V60 Cross Country money will get a fully-loaded, all-wheel drive estate with a 181bhp diesel. It's relatively fun to drive, too.