Handsome, comfortable and safe. Excitement should come with the Polestar versions 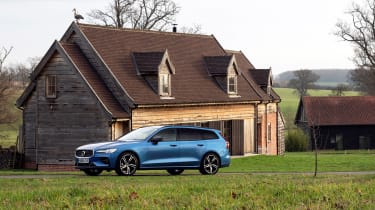 Volvo calls the new V60 “Volvo’s heartland reinvented”. It’s essentially the brand’s core product, a follow-up to the boxy wagons of the past, from ubiquitous 240s, to the 850s that turned the company’s reputation around in the BTCC during the mid-1990s.

Yet it’s also a modern Volvo, which means riding on a platform that’s ripe for electrification, and riding on an enviable reputation for safety - both important for family buyers. With Polestar Engineered Volvos on the horizon there’s still the promise of entertainment to come, too. In the meantime, we’ve driven the V60 in D4 form to assess its potential.

Volvo’s entire range hinges around a mixture of 2-litre petrol and diesel powerplants, and the same applies to the V60. Initially there will be three engines available: D3 and D4 diesels, and a petrol T5, all sending their power to the front wheels alone.

The D3 makes 148bhp and 236lb ft of torque, allowing it to sneak under the ten-second 0-62mph barrier by a single tenth - regardless of whether you’ve opted for the six-speed manual or eight-speed automatic transmission. The D4 is also available with both manual and auto ‘boxes, and its 187bhp and 295lb ft outputs allow it to reach 62mph in 7.9sec from rest. 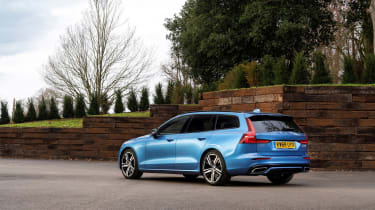 Topping the range is the auto-only T5, with 247bhp. Performance and torque figures are yet to be confirmed. A T4 petrol will be along at a later date, as will T6 and T8 “Twin Engine” plug-in hybrids. For the time being the most frugal model are the manual D3 and D4s, capable of up to 64mpg.

We drove the D4, which feels more than capable of achieving its quoted performance figures but is otherwise typical of four-cylinder diesel engines in this class - that is to say relatively unobtrusive and entirely devoid of character. It’s audible at higher revs but not noisy, and it pairs well with either transmission, though in the manual it’s easy to be caught below the 1750rpm torque peak, at which point acceleration is glacial.

It feels better paired with the automatic. You don’t get steering wheel-mounted paddles for manual changes (which feels odd now they’re so commonplace, but not out of character for a Volvo product), but knocking the selector lever to the left allows you to change up or down by pushing forward and pulling backward respectively. When you do, the engine feels much more eager and the changes themselves are smooth and swift - and left in auto it’s as relaxing as you’d expect. 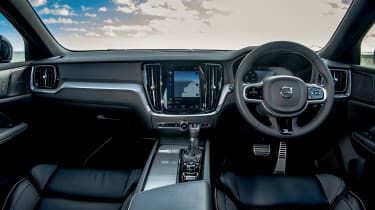 Like all of Volvo’s recent models the V60 sits on the firm’s Scalable Product Architecture (SPA) platform, which has been designed with future electrification in mind (from 2020 all new Volvo products will be electrified to some degree).

Suspension is double-wishbone up front and multi-link at the rear, the rear also using a transverse composite leaf spring for packaging and weight benefits. Adaptive damping is available and R-Design models, available later down the line, will get a sports suspension setup.

Volvo is rightly proud of its safety technology and the V60 continues this trend with the availability of Pilot Assist semi-autonomous technology (which can keep the car within its lane, assist with steering and accelerate and brake with the flow of traffic). Various anti-collision systems are also fitted, along with systems to help prevent the car running off the road or into the path of other vehicles. 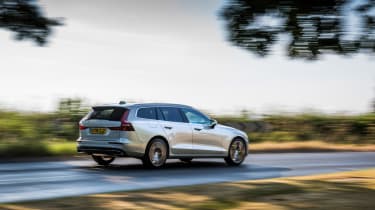 It’s worth noting too, given Volvo’s heritage, that the V60’s 529-litre boot (with the seats up) makes it more spacious than the 505-litre Audi A4 Avant, 495-litre BMW 3-series Touring and the 490-litre Mercedes-Benz C-class estate. And it’s a significant step over its 430-litre predecessor. Handsome the new V60 may be, but this is very much a “proper” Volvo.

From the moment you twist the knurled starter knob and pull away, the V60’s mission is clear: this is a car to soothe rather than excite. Noise and vibrations from the engine are kept to a minimum, the controls are fluid but light, and the ride is absorbent regardless of trim level, suspension or wheel choices.

And to be clear, that’s not a criticism. There’ll be a Polestar Engineered variant of the V60 along in due course with higher performance and a more engaging chassis to take the fight to hotter German rivals, but in the meantime the V60 is a compelling alternative to the less exciting versions of A4 Avants, 3-series Tourings and C-class estates.

For one, the cabin is tastefully appointed, well-constructed, quiet, and as we’ve come to expect from Volvos, the seats are among the best on the market for spending hours at a time in, aided by a wide range of adjustment in the seats and steering wheel. Neither the TFT display nor infotainment setup are quite the best in class (Audi probably takes the edge here thanks to its Virtual Cockpit option) but you do get a head-up display and with more familiarity the unusual portrait touchscreen would be easy enough to fathom. 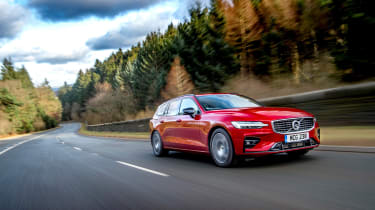 Out on the road you’re struck by the light controls, with a featherweight feel to the throttle pedal, strong but relatively soft brakes, and friction-free (and feedback-free) steering. It’s certainly not a car that encourages you to press on from the outset, even when the driving mode switch is rotated to Dynamic and you’re granted extra steering weight, better throttle response and (on some models) firmer damping, not least because the step up from Comfort feels relatively small.

The chassis can cope with harder driving however, and while body control isn’t quite in the same league as those German alternatives can manage - the V60 takes a moment to compose itself over undulations and in quick changes of direction - the trade-off is a ride quality that betters any of those, feeling long-legged on the motorway and cosseting on more broken surfaces.

Importantly, it does feel like a good basis for an eventual performance model, with a solid feel to the structure and no glaring flaws in its dynamics. For the time being, it’s simply a refined, comfortable and handsome family wagon - and infinitely preferable to any of the crossovers you might consider as alternatives.

The V60 range begins from £31,810 for a D3 manual in Momentum trim and currently extends to £40,670 for the T5 auto in Inscription Pro form. All trim lines - Momentum, R-Design and Inscription - are available in both their regular form and as “Pro” models, which essentially adds much of the kit you’d likely specify individually anyway.

Not that V60s aren’t well-equipped from the outset. The base-level Momentum trim features keyless start, cruise control, LED headlights, alloy wheels (17in for D3 and D4 models, 18in for the T5), textile upholstery, a huge list of safety features and a 10-speaker audio system. Pro trim, depending on the base equipment line, adds everything from leather trim and heads-up displays (on the Momentum Pro) to heated wiper blades and 19in diamond-cut wheels (on the Inscription Pro). Pro versions are £2250 more than the equivalent standard trim level.

The V60’s closest rivals are the German trio - Audi A4 Avant, BMW 3-series Touring, and the Mercedes-Benz C-class estate. All three start in the same ballpark as the Volvo pricing-wise, and while most offer a wider range of powerplants (including units with smaller capacities and more cylinders, depending where you look), Volvo’s pair of four-pots allows it to compete on performance and economy with the Audi, BMW and Mercedes.

Both the BMW and Mercedes are more engaging to drive than the Volvo and the Audi slightly edges its Swedish rival in terms of refinement (if not ride comfort), but until you opt for the higher-performance models none are exactly thrillers in their own right. The two that might be more entertaining - Jaguar’s XE and Alfa Romeo’s Giulia - sadly aren’t available as estates.