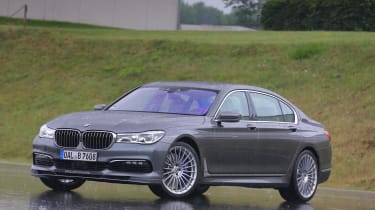 If you’ve ever wanted to own a luxury saloon capable of topping the double-ton, then Alpina’s new B7 Bi-Turbo will probably be somewhere on your shortlist. Having made its debut at the Geneva motor show, the new B7 is now available in the UK - and its top speed has climbed from the early prediction of 193mph, to 205mph.

That’s not a figure you’ll be able to explore in the UK itself of course, but it does elevate the B7 into the rarefied world of 200mph saloon cars and into the realms of the supercar - as does a 0-60mph time of four seconds flat.

That performance comes courtesy of the B7 Bi-Turbo’s centrepiece, a 4395cc twin, twin-scroll turbocharged V8 churning out 600bhp between 5750 and 6250rpm, and a thundering torque output of 590lb ft from 3000-5000rpm. The extra power over BMW’s own V8 applications (the similarly-powerful M760Li instead uses a V12) comes as a result of airflow optimisation, a wide-bore intake system and uprated pistons and spark plugs, while an air/water/air intercooler keeps intake temperatures low. 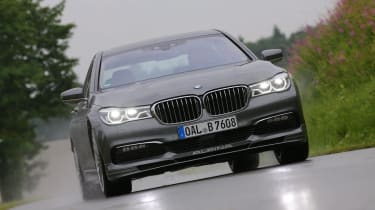 As ever, power is sent through a ‘Switchtronic’ automatic transmission with buttons on the spokes of the steering wheel - though you’ll be more familiar with it as an eight-speed ZF automatic. To deploy such torque requires greater strength though, so Alpina has worked directly with ZF to beef up both the gear clusters and the torque converter. Unlike the M760Li, it’s also rear-drive only.

UK-specification cars will all be supplied in long-wheelbase form, and equipped with air suspension as standard - which includes an Alpine Sport+ mode to lower the car by 20mm. Alpina has also tweaked the active rear steering to its own tastes and recalibrated the power steering and traction control.

Wheels, as per the Alpina norm, are sizeable - 8.5x20in up front and 10x20in at the rear, wrapped in 255/40 ZR20 and 295/35 ZR20 tyres respectively. Experience suggests the car will match or even exceed the ride quality of standard 7-series though, a benefit of Alpina’s ability to tailor the car to specific wheel and tyre combinations, rather than a wide range of different wheel, tyre and suspension options. That said, a 21-inch wheel option will also be available. 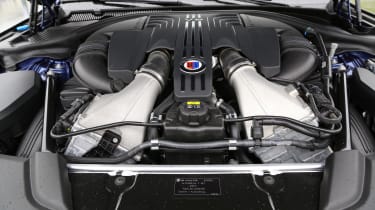 The price of all this performance and luxury is £115,000, which actually undercut’s BMW’s own luxury supersaloon by more than £17,000. While you’re missing the M760Li’s four additional cylinders there’s little to choose between them in terms of performance (the BMW hits 62mph in 3.7sec, but the Alpina is faster at its maximum), and with only a handful heading to the UK, the Alpina’s exclusivity will surely appeal to some.