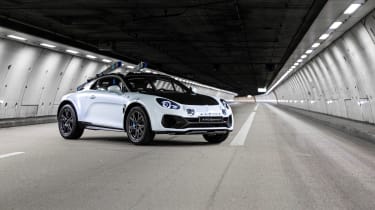 Alpine has revealed a one-off version of the A110 inspired by its success in rally competition. A collaboration between Alpine’s design studio and engineering team, the A110 Sports X is meant to be a retrospective look at what a modern-day Alpine A110 rally car would look like if it were based on the excellent current model.

Underpinning the changes between the A110 Sports X and the standard A110 Pure on which it is based is an 80mm wider body that sits 60mm taller than usual. As well as wider arches, Alpine’s designers have also opened them up to fit taller-section all-season Michelin Primacy 18-inch tyres wrapped around familiar wheels from the standard model. 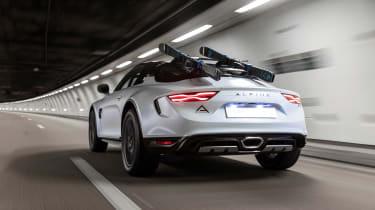 Bespoke bumpers front and rear also toughen up the A110’s usually delicate design details, while the lower bumper sections front and rear feature skid plates for improved protection from rough terrain. The sill covers have been removed and replaced with some funky floating appendages, while the wheelarches themselves have black linings for some extra off-road style.

The two-tone black and white bodywork, blue detailing and mounted skis complete the look, one that we can only hope might be realised in production as an epically cool version of an already cool sports car.

Unfortunately, if you want one Alpine is unlikely to oblige, but it is worth remembering that it does sell the A110 Rally, a rally ready competition version that is able to be homologated for WRC Group R-GT class. At £135,000, it’s a tad more expensive than the standard model, but will certainly appeal to buyers fond of reliving Alpine’s rallying success.