Will more power, a firmer set-up and visual tweaks make the A110S the Alpine to have? 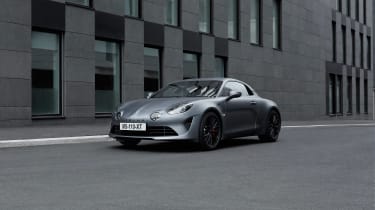 Alpine’s A110 sports car was one of the highlights of 2018, finally proving that the Porsche Cayman need not be the default choice if you have fifty grand or so to spend on a new sports car. Light of weight, fluid of handling, and striking to behold, it came within a whisker of winning 2018’s evo Car of the year test.

2019’s eCoty line-up had better be on good form then, because Alpine has now released details of the A110S – a more focused range-topper sitting above the Pure and Légende models in the French marque’s line-up.

While more expensive, with a starting price of £56,810, the A110S justifies its extra outlay with more power and a revised chassis set-up, along with a series of unique design touches. 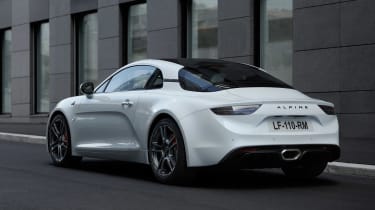 Those start with the availability of a new paint colour, Gris Tonnerre, notable for its matte finish. The Tricolore flags on the B-pillars have made way for a carbonfibre and orange motif, while Alpine lettering is now black. The orange flag details are replicated in the orange brake calipers (behind new ‘GT Race’ dark-finish alloy wheels), while interior stitching is also now orange, rather than blue.

The cabin itself keeps the A110’s familiar design, while the excellent 13kg Sabelt seats optionally available in certain models are standard in the A110S. They’re differentiated by the use of Dinamica microfibre fabric, an artificial suede-like material analogous to Alcantara, which also finds its way onto the headlining, sun visors and door panels, as well as the part-leather, part-Dinamica steering wheel.

The 12-o’clock marker on the latter is now also orange, while pedals and footrests are aluminium, and the carbon and orange flag badges from the exterior changes also make an appearance inside. 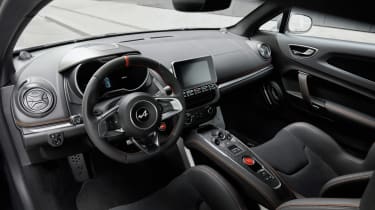 A more significant change is the availability of a £2,208 carbon roof panel, said to lower overall weight by 1.9kg. Alpine quotes a kerb weight of 1114kg for the A110S, which on paper is 16kg more than the Pure, but 9kg lighter than the Légende.

It may feel even lighter to drive though, as the chassis set-up is more aggressive than before. Front springs are stiffer by 50 per cent, with dampers retuned to match, the bump stops have been redesigned, and the front and rear anti-roll bars are twice as firm as before. The car sits 4mm lower over new wheels and tyres – 215mm in section at the front, 245mm behind – while the Michelin Pilot Sport 4 tyres have a compound specific to the S.

The idea, according to chief engineer, Jean-Pascal Dauce, is to create a ‘very focused sports car’, in contrast to the more playful A110s we’ve seen so far, which are closer in spirit to the original. The new model should have improved high-speed stability and handling precision as a result. However, Dauce does stress the A110S will still be a comfortable car, and that it should still be enjoyable regardless of driving experience – two key qualities of the standard car.

A reconfigured stability control system (particularly in Track mode) will allow drivers even more access to the chassis changes though, and stopping shouldn’t be a problem either, with standard fitment of the 320mm Brembo braking set-up until now optionally available on other Alpines.

That’s just as well, not just for the excellent pedal feel we’ve experienced on A110s with Brembo brakes so far, but also because the A110S features a more potent version of the standard car’s 1.8-litre four-cylinder. The turbocharged unit now produces 288bhp at 6400rpm - 39bhp more than before, thanks to 0.4bar of additional boost. Torque is rated at 236lb ft, from 2000 to 6400rpm.

Transmission is still by seven-speed Getrag dual-clutch to the rear wheels, with a brake-based e-differential to enhance traction. On paper the changes are good for a 0-62mph time of 4.4sec, only a tenth better than before, but Alpine promises a more thrilling power delivery, particularly in the 5000-7000rpm top-end range.

We’re eager to see whether the changes justify the increase in cost, but we shouldn’t have to wait long, as order books for the A110S open early next month.