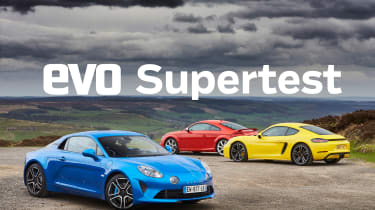 It’s been a long time coming, the new Alpine A110. After years of teasers and concepts, the possibility of a new, lightweight, simple, mid-engined sports car was dangled in front of us until we were just about to turn around and stop paying attention. Then the covers came off. The A110 is a breath of fresh air, an exercise in the best sort of minimalism, but with the £50k price tag comes some serious rivals to consider along the way. To find out how it goes, we welcome you to our next evo Supertest, and it’s a doozy.

The Alpine’s key rivals come from more familiar places. The Porsche 718 Cayman S has been lauded for its all-round brilliance, but comes into this test with a serious thorn in its side. The 718’s implementation of a turbocharged flat-four engine has not found favour among enthusiasts, and although the rest of the car is stronger than ever, a rare chink in the Porsche’s armour has been revealed.

It’s not just the Porsche that the Alpine has to keep its eye on either, as Audi’s new TT RS has transformed itself from poser to poster boy in Audi Sport’s range. The Audi hits hardest here, with 394bhp; its wonderful sonorous five-cylinder engine is unmistakably a highlight of this trio. 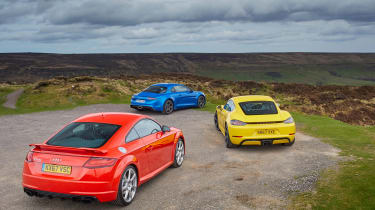 The Alpine may come with little modern reference point, but even if you’re too young to remember A110s ripping their way up and down the Col de Turini in the ’60s, you can still appreciate the attention Alpine has paid towards reducing its bulk. At little over a ton, (1093kg as tested), the A110 achieves its featherweight status by using a bespoke all-aluminium chassis, combined with a small-capacity 1.8-litre turbocharged four-cylinder engine mounted in the middle. It’s the same unit as found in the latest Renault Mégane RS, albeit mildly detuned at 249bhp.

This may sound like Alpine has brought a mop to a gunfight against the far more powerful Germans, but that lack of weight is a key factor in not being as off the pace as one might expect. The A110’s supreme composure makes it a difficult thing for the others to shake over the undulating Pennine roads that hosted our gathering, making exceptional use of every single one of its horsepower. The Audi, by contrast, is a point-and-squirt machine, ruled entirely by the proficiency by which its quattro all-wheel-drive system can lay down its considerable power, but without much in the way of nuance in the process. 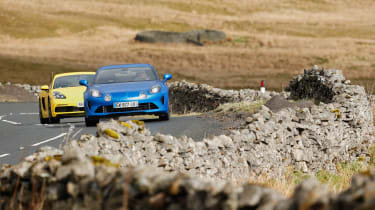 The Porsche is less deterred by the challenging terrain, supremely competent and communicative, but somehow less enthusiastic about the whole endeavour. The sheer class of the chassis, its wrything, sinuous yet somehow incredibly polished manner all comes from Porsche’s innate engineering ability, but somehow achieves this without the 718 feeling insipid. The 345bhp Cayman S is almost too good down the road. But where the old Cayman’s flat-six engine was the chassis’ perfect partner-in-crime, the new flat-four is little more than an efficient P.A. Effective but featureless, flat in every sense of the word.

So the Alpine A110 is definitely worthy; a theatrical example of a different ethos to sports car making. Is it also worthy of its claim to be the best £50k sports car money can buy? Keep reading for further highlights from the Supertest featured in issue 249, including how they perform on track, against the stop watch, and finally the end result.

Click the links below to jump to the supertest data and track test sections, then get the final verdict.

This evo Supertest appeared in full in evo 249. Subscribe to evo here for the next in the Supertest series.