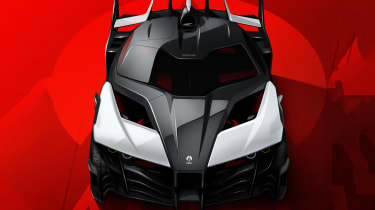 Ariel has released the first details of a revolutionary new battery-powered hypercar that will place it at the forefront of EV performance development when it enters production, scheduled for 2020.

The Hipercar - that’s not a typo, rather an abbreviation of HIgh PERformance CArbon Reduction - will offer an extraordinary 1,180bhp and 1,330lb-ft of torque in its ultimate four-wheel-drive guise. Its projected performance figures are as otherworldly as some of the technology contained within its specification sheet: consider 0-60mph in just 2.4-seconds, 0-100mph in 3.8 seconds and 0-150mph in 7.8-seconds.

The Hipercar project, codename ‘P40’, began in 2014 and is the result of a joint programme between UK firms Ariel, Equipmake and Delta Motorsport, with contributory funding from Innovate UK, the UK government’s innovation agency. The project moves into its testing, development and production phase next month, where GKN Hybrid Drive, Johnson Mathey and Semikron will join in, overseen by a steering group made up of JCB and Alexander Dennis.

> Click here for our review of the Ariel Atom 3.5

A series hybrid, the P40 is powered by a lithium-ion battery pack rated at 42kwh (4WD) or 56kwh (2WD). Each wheel is powered by an inboard motor via an integral, single-speed step down gearbox. Given each of these motors is able to produce 295bhp and 332lb-ft of torque, even the two-wheel-drive variant should boast 590bhp. A complete motor and ‘box assembly weighs 57kg.

Although it’s possible to charge the Hipercar in the conventional plug-in manner - no mean feat given it runs at up to 750 volts - it also features a micro turbine running at a constant 120,000rpm, which steps in automatically to maintain charge in the batteries.

Although no design for the body has been revealed as of yet, Ariel has released images of the chassis and overall package. It’s a folded and bonded aluminum tub, with subframes front and rear to carry the unequal length double wishbone suspension. The wheels will be forged or carbon fibre shod with Michelin Pilot Sport Cup 2s, measuring a massive 325-section on the rear in a bid to contain the Hipercar’s devastating peak torque output. The battery pack is located beneath the floor and the centre tunnel, and completely inside the wheelbase.

> Click here for our review of the Ariel Nomad

Even more intriguingly, Ariel are pursuing the idea of generating downforce from standstill, in the manner of the infamous Brabham BT46B ‘fan car’, victorious in its one and only Grand Prix start at the 1978 Swedish Grand Prix.

Ariel has yet to decide on an official name for the P40, but any car that can make a supercharged Atom appear like it’s standing still promises to redefine how we view road car performance. 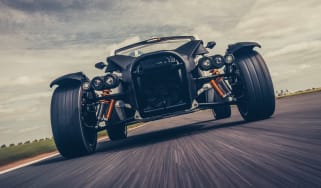