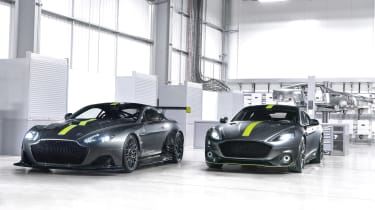 Aston Martin has reinforced its connection between its road car line and its racing exploits at the Geneva motor show, with the launch of two new 'AMR' models.

Of the two, the Rapide AMR is perhaps the most unusual, as although it does indeed have some racing under its belt (at the Nurburgring 24 Hours), it's a car one perhaps doesn't associate with motorsport.

As such, it's a little less extreme than the Vantage AMR Pro. No less striking, though - while the Stirling Green paintwork is relatively subtle, the lime green stripe down its centre, as well as lime green accents on its front splitter, side skirts and rear diffuser, are anything but. 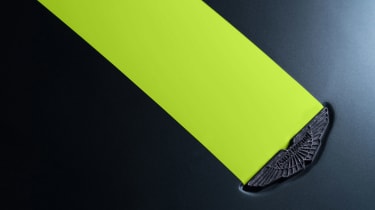 The 21-inch alloy wheels are all new, as is the aero package and the small spoiler sitting atop the bootlid. Inside it trades the usual gin palace leather trim for something more familiar from the racing paddock, with more lime green accents (including an enormous central stripe on the rooflining, echoing that of the exterior, a set of carbonfibre front seats and a carbonfibre "waterfall" centre console. The 6-litre naturally-aspirated V12 exhales through a quad-exit exhaust system.

The Vantage AMR Pro sits much closer to the GT3 and GT4-class race cars, not least because Aston Martin bills the car as track-only - though like other high-end track-only vehicles, it can't be long until an enterprising business begins converting them for road use.

Either way, the engine is effectively GT4 spec, its 500bhp output making it the most powerful V8 Vantage thus far. It'll be a fiery companion too with competition-spec engine and transmission mounts sending every shiver of the V8 through the chassis, which itself is mounted on adjustable suspension.

Wheels are 19x9.5in up front and 19x11.5in at the rear, attached to centre-lock hubs and wrapped in sticky Michelin Pilot Cup 2 tyres. 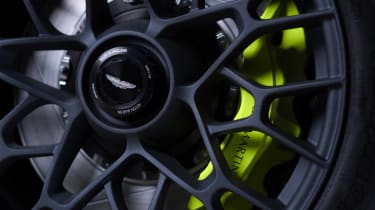 Styling takes cues from the friendlier Rapide and runs with them: The vibrant centre stripe returns, but the lime green also features on the end plates of the huge GT rear wing. The front grille stretches from the splitter to its usual home on the nose (without a numberplate recess) and the bonnet is latched using racing pins.

The cabin too is special, but no stripped-out racing environment: like the Aston Martin Vulcan it's very much a quality piece, once again dotted with lime green accents and making use of carbonfibre bucket seats. You do however get a custom roll cage, hidden neatly away behind the seats.

Eventually, says Aston Martin, every model in the range will have an AMR-specification model, which suggests some crazy vehicles will soon be on the way.