Chris Goodwin and Matt Becker are the men defining how the new breed of Aston Martins drive, this is their take on what's to come 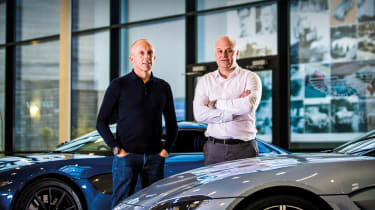 It was an announcement that sent a tangible shockwave through the high-performance car industry. Just before Christmas 2017, Chris Goodwin, who everyone thought was a ‘lifer’ at McLaren, having been at the heart of its road car development since the the MP4-12C, announced he was packing his bags in Woking and joining Aston Martin instead.

‘I’m here because Adrian Newey called me a few months ago, in the summer of last year actually, and he lured me in,’ explains Goodwin of his decision to relocate to Gaydon. ‘Then I got another call from Andy Palmer a month or so later and he lured me in even further. And the big draw for me was the Valkyrie: both versions – road and track.

> Click here for more on the new Aston Martin Valkyrie

‘So that’s what I’m here for at the moment,’ he says, ‘because it represents a one-off opportunity. There will only ever be one first road car from Adrian, and that’s why I gave up what I did because, for me, this is a unique project. It’ll only ever happen once – although, of course, it’s not the only reason why I left where I’d been for the last 20 years. Eventually I’ll get involved with all sorts of other projects at Aston Martin. 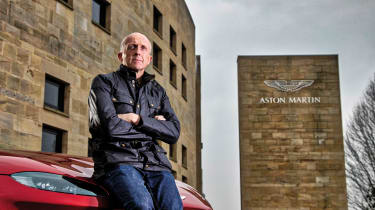 ‘But for the time being – for quite a while, in fact! – it’s all about the Valkyrie for me.’

So has there been any crossover yet with the burgeoning range of cars being designed and engineered by Aston, such as the new Vantage or the forthcoming all-EV Lagondas? ‘Not much, not yet,’ he says, admitting that he’s only spent limited time in a Vantage at Nardò.

But what there has been already is a fair bit of information sharing between what Goodwin is doing in the simulator at the Valkyrie HQ in Milton Keynes (where the Aston Martin Red Bull Racing F1 team is based) and what Matt Becker and his team are doing back at the factory. The development of the Valkyrie may be all virtual at the moment, but Becker admits it is already providing some benefits to the future development of the regular road cars.

There won’t be a running Valkyrie prototype until Q3 this year at the earliest. Not that this has prevented Goodwin from lapping the likes of Silverstone, Spa, Monaco, Barcelona, Suzuka and Pau already, and in minute detail, in the simulator. And the lap times are apparently quite wild.

‘The performance of the base car, so not the track version, is massively quicker than any other road car I’ve ever experienced,’ says Goodwin. ‘And if you then extrapolate that all the way through to the track car, with less weight, on slick tyres and with even more aero, well maybe you can imagine where it’s going. Except, you can’t really, because that’s how much further we’re pushing it.’

The bottom line is, the Valkyrie will be in another league from anything, anywhere, at any price, says Goodwin – assuming his experiences of it in the simulator translate to the road. And there’s no reason to believe they won’t.

‘The simulator gives us a massively clear idea of where the car is right now, and it’ll allow us to hit the ground running when the first prototypes start being driven later this year,’ says Goodwin. ‘And we’re already in a pretty incredible place.’

Given the kind of road cars he’s been involved with in the past, and judging by the slightly crazed expression that comes into his eyes whenever he’s talking about the car, its design, its intended usability – ‘it will be super-driveable’ – plus its ‘incredible’ performance, it’s clear that Chris Goodwin is rather excited about the Valkyrie. Both versions.

Then again, why else would he have given up what was considered one of the best jobs in the entire industry?