Aston’s uber-GT earns its stripes, but hardcore comes at a cost 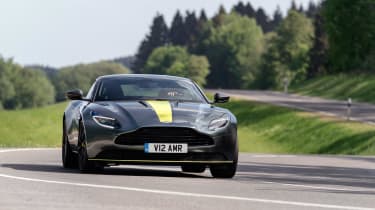 ‘New Aston’ could hardly have been clearer when the DB11 arrived in 2016. This was a GT specialist, its skillset informed by speed with suavity and comfort, hardcore ‘super sportscar’ sensibilities at the time left to a made over version of the old-gen Vanquish S. The subsequent DB11 V8, with a bi-turbo Mercedes-AMG motor instead heavy, twin-turbocharged V12, arguably made an even finer fist of the GT remit, trading a little straight line pace for greater powertrain refinement, chassis balance and comfort.

So if Aston’s peachiest and purest GT is perceived to be the DB11 V8, it leaves the V12 at a bit of a loose end. Unless you pump it up. Which is where Aston Martin Racing comes in, and why, if you order your initial run limited edition (100-off) DB11 AMR, with its full set of go-faster stripes, it looks like a car pushed firmly out of the now retired original V12 model’s comfort zone.

The headline power hike isn’t as dramatic as it could have been – apparently the twin-turbo 5.2-litre V12 still has a good few gee-gees in reserve; look out for around 700 when the DBS Superleggera arrives – but 630bhp at 6500rpm adds 8mph to the previous 200mph maximum and cuts the 0-62mph time back to 3.7sec. For the AMR, the eight-speed ZF auto transmission remains in situ, but with faster-shifting, more aggressive Sport and Sport+ settings. 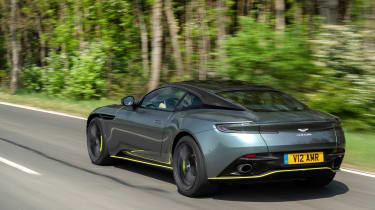 Harder to hide, should you wish to keep the AMR’s extra 30bhp under wraps, is the more bombastic exhaust note, which itself, chimes with the overarching initiative to give the DB11 a racier mien or, as Aston boss Andy Palmer puts it: ‘a more vivid driving experience that preserves the maturity and effortless continent-crushing GT performance for which the original DB11 is rightly renowned’.

Like Mercedes’ AMG and BMW’s Motorsport, AMR gives Aston the space to sportify, via an evolving suite of performance metrics (many chosen and expertly calibrated by dynamics chief Matt Becker), any model it fancies – next up, the four-door Rapide, a car Becker has a real soft spot for.

As for the new DB11 flagship, it’s now much closer to the V12-engined car Becker would have liked to have seen from the start though he admits that the development of the V8-engined DB11 had to happen first so that elements of its sharper, sweeter-handling chassis could be carried over to the AMR. 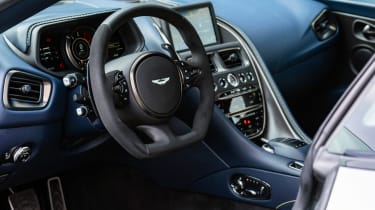 The extra power, lighter wheels and chassis tweaks are easy to appreciate in what is ostensibly the default GT mode. There is such a thing as ‘ample’ for the road, and the way the DB11 AMR delivers ‘more than’ without breaking sweat or calling on the exhaust pipe histrionics of its enhanced modes is deeply satisfying. Like this – and later when we take in a few miles of unrestricted autobahn – the DB11 AMR truly feels like a car of immense performance and ability that’s completely comfortable in its own skin; a car able to travel at an eyewatering lick anywhere that can accommodate its rather portly width without looking or sounding if it’s trying that hard.

If I owned one, I seriously question how much I’d use Sport on the road, never mind Sport+. It was different with the original V12. That car could feel a little sleepy and unresolved in its standard settings, gaining a palpable sense of purpose, focus and sonic presence (a little louder, just right) in Sport and Sport+. The same template fits with the AMR but, this time, the results seem a little more contrived and, if anything, detract from the up-rated DB11’s now more gracefully potent core character. The multi-layered yowl of the V12 in full flight is still a joy to listen to but I’m not sure the increased volume of pops and bangs on the overrun adds a great deal to the canon of great exhaust notes past and present.

That said, few senior GTs can hustle like this one. It’s a seriously quick and extremely secure bit of kit that doesn’t require hero-level chops behind the wheel to go stunningly fast. If you really want to exploit the motive potential of every last bhp, and wring the final scintilla of grip from the vast stash supplied by Becker’s handiwork, Sport or Sport+ seems the place to be. But that lovely effortless fluency and sense of dynamic coherence present in GT mode will be lost. The DB11 AMR is a great GT at heart with an alternate, bolt-on hardcore persona. It delivers in raw terms, but the segue doesn’t feel quite right.