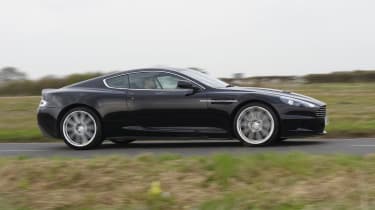 I’ve discovered that when you own an Aston Martin there is an unwritten code of conduct that goes with the privilege. Let me explain. Drive a Lamborghini in Italy and should you be fortunate enough to pass another of Sant’Agata’s finest you can be sure the occasion will be marked with the flashing of lights and wild gesticulations. By contrast, if you drive an Aston in England and you come across another of Gaydon’s finest you will find the occasion marked by – at best – an almost imperceptible downwards movement of the head. All very civilised. I quite like it, in fact.

Since my last report I’ve stumbled upon a couple more of the DBS’s secret weapons, neither unfortunately being front-mounted .30 calibre machine guns. The first is courtesy of a considerate fellow DBS owner and evo reader who emailed me to suggest removing a fuse. The magic Fuse 22 in fact. Taking this out allows the valves in the DBS’s exhaust to open at all engine speeds, instead of only over 5000rpm, and in doing so takes the Aston one step closer to being just a little outrageous. The sound from the mighty 5.9-litre V12 is now truly awe-inspiring at all speeds.

Reading the instruction manual (and not before time!) led to the discovery of the second thing: a ‘Track mode’ button. Now, I’ve always viewed such things with a little scepticism, as my old orange Lambo Murciélago long-termer (still alive and kicking, now with 109,000 miles on the clock) has a similar switch that doesn’t seem to alter the car’s characteristics one iota. But on the DBS? It’s simply terrific! The big Aston hunkers down, becoming much sharper through the twisties and feels far and away more ‘planted’ on the black stuff. Despite the harder ride and corresponding protestations from the girlfriend, this button, with the aid of a bit of Sellotape, now stays permanently pressed. OK the 1700kg Aston is no Ariel Atom, but gone is the confidence-sapping detached feeling previously experienced, especially on wet roads. I’m just annoyed with myself for not finding it before.

Problems so far? Well, a door-seal on the driver’s side has come away, and the satnav screen doesn’t quite lower itself completely into the piano-black dash. Hardly major issues, but as the Aston is booked in for its first service soon I’m hoping they will be addressed.

My three-month verdict, then. After a moderately good start I have to admit the DBS has grown on me enormously. It may be 100bhp or so down on the four-wheel-drive LP640, but now I’m learning to adapt to it, I’m finding this rear-wheel-drive monster is right at the front in the fun stakes. Just wish I could shake off the strange desire to wear a bow tie whenever I drive it…