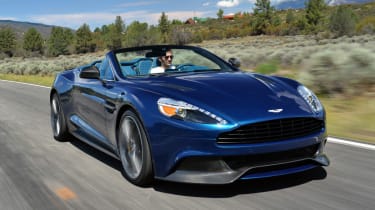 The Aston Martin Vanquish Volante. It’s the first time the Vanquish name has been applied to a convertible, and it’s effectively a successor to the Aston DBS Volante. It costs a fiver under £200k, at £199,995, which means a price hike of around £9000 over the Vanquish coupe.

The Volante’s soft-top roof electronically opens or closes in 14 seconds. The car is endowed with the same updated 5.9-litre V12 as the coupe, which means headline figures of 565bhp at 6750rpm and 457lb ft at 5500rpm. In these days of 730bhp F12s, these are not numbers to make jaws hit floors but they still compare reasonably well with those of what might be seen as rivals. The Bentley Continental GT Speed has more power at 616bhp but also weighs 2320kg, so its 0-60 time of 4.2sec is a tenth slower than the Aston’s. However, the Volante isn’t exactly a lightweight itself at 1844kg, so the Mercedes SLS AMG Roadster, which has similar outputs (563bhp and 479lb ft) but weighs 184kg less, manages to trump it in the benchmark acceleration sprint, at just 3.8sec. The Vanquish's 183mph top speed is limited by its gearbox.

One area in which the ‘AM11’ engine can easily hold its own is in the sound it orchestrates. In the same way you can pick out a Ferrari V8 or Porsche flat-six at a thousand paces when you’re in London, there is something about the deep, comforting, slightly lazy burble at idle that is instantly recognisable as Aston. It’s a very mellifluous, distinguished sound, not as raw as that of some cars in its class and somehow beautifully befitting.

Whilst the satnav screen still rises slightly awkwardly from the dash, it is at last packed with decent Garmin software and so is worth using. What’s more, if you plan on plugging in a destination on the other side of a continent, then you’ve got a decent amount of room in which to pack luggage for the trip. The boot is 50 per cent larger than the one in the DBS and isn’t affected by the roof being stowed. The rear seats are also available for extra luggage space – because you’re certainly not going to fit any human beings in them.

There are three damper modes – Normal, Sport and Track – which are selected via a glass button in the bottom-left sector of the steering wheel. I’d argue that for spirited driving on the road, Track mode is actually the one to go for. It’s not as stiff as the same mode on the V12 Vantage S and it keeps the Vanquish tied down and agile. Even in this stiffest setting, there isn’t any appreciable wobble or shake from the structure, which is very impressive. Aston claims that the Vanquish Volante is 14 per cent torsionally stiffer than the DBS Volante, and it feels every bit of that and more.

It’s a big car, so the extra width of the Californian roads undoubtedly helps the Vanquish, but the steering is also beautifully accurate and has a surprising amount of feel, so you’re always confident of placing the car where you want. You can feel the weight of the Vanquish in the corners, but it’s well controlled and you certainly don’t notice it under acceleration. Perhaps it’s as much a consequence of having the roof down and the exhaust noise rebounding off rock faces, but the Vanquish feels stunningly quick between the corners. You feel the weight again as you hit the brakes and lean the car on the huge 398mm front discs and six-piston calipers (lifted from the Aston One-77 hypercar), a sensation which could be disconcerting. However, Aston does some of the very best carbon-ceramic brakes in the business in terms of feel, so through the ball of your foot you get a reassuring sense of how heavily the pads are biting, and you always know how near the limit you are.

With the coupe, the only major blot on its dynamic copybook is the gearbox, which never feels like it is fitting for a car meant to be at the pinnacle of the company’s range. The Volante has the same six-speed automatic and it certainly doesn’t have the snap of the best twin-cutch ’boxes available. However, the speed of the shifts certainly doesn’t seem obstructive either. The flowing nature of the roads here undoubtedly helps, as it’s easy to plot your course a decent way ahead and therefore plan the gearchanges in advance, but I never feel frustrated by the ’box in the same way that I sometimes have in the coupe.

It’s priced within a few per cent of the 562bhp Ferrari 458 Spider and 616bhp McLaren 12C Spider, and is evidently less hardcore. But I’d go so far as to argue that Volante status suits the Vanquish rather well. As a coupe I’m never quite sure where the Vanquish is designed to fall – as the top of the Aston tree, it clearly wants to be a supercar, but largely because of the automatic gearbox, its demeanour is more fast GT. Lop the top off the body, however, and there seems to be less ambiguity about its character and less need for it to be considered as an out-and-out hardcore thrill-seeker battling against Lambos, Ferraris and the like.

It’s still mighty fast and very capable, but as a slightly softer-looking car (I can’t think of a convertible that doesn’t look less aggressive than its hard-top counterpart), it feels more comfortable in its carbonfibre and canvas skin, because the driving experience now more closely matches the image it’s projecting

I’m not sure how many Smurfs were slaughtered to create the interior effect but I really don’t think it was worth it. The quilting on the seats is also dubious as far as I’m concerned, but no doubt some of you think it all combines to create the nattiest cockpit since TVR went under. That’s the point of personalisation, and there are 32 interior colours available while the gearbox’s paddle shifters can be leather trimmed (our test car’s being yellow). The square steering wheel isn’t the easiest on the eye either, but as soon as you take hold of it you are instantly won over, because in your palms it feels like the perfect size and shape.