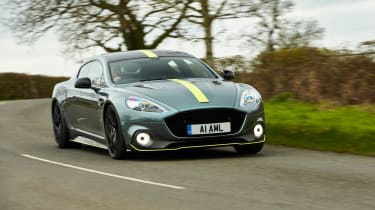 After nearly a decade in production Aston Martin’s Rapide isn’t long for this world, its role of the four-door Aston supersaloon soon to be taken on by the return of Lagonda and a series of ultra-luxury electric saloons and SUVS, which will begin with a limited run of 155 electric-powered Rapide Es.

Before the volts take over, however, there is one glorious swansong for Aston’s slightly curious four-door, four-seat (in the loosest terms) supersaloon in the guise of the Rapide AMR – a 595bhp, £194,950, 12-cylinder fanfare to days gone.

For a car that started production in 2010, and was first shown as a concept four years previous, it would be unexpected to find anything groundbreaking under Marek Reichman’s original design. Essentially the Rapide is a stretched DB9 and is therefore built on Aston Martin’s VH aluminium platform and has the honour of being the last such car to be built using the VH architecture that was first introduced on the original Vanquish in 2002. 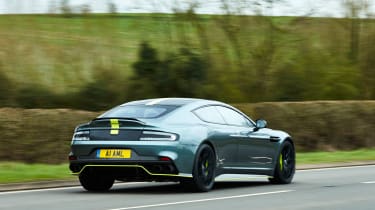 Over and above the Rapide S with which it shares much, the Rapide AMR has been through Matt Becker’s workshop and come out the other end as sharp and crisp as possible. A 10mm drop in ride height, combined with a recalibration of the three-way adaptive dampers, account for the chassis upgrades designed to tighten the body control and improve damping and chassis responses.

Gargantuan 400mm carbon-ceramic discs and six-pot calipers sit behind the pair of front 21-inch alloy wheels, with 360mm discs of the same construction and with four-pots found behind the rear wheels, with each corner featuring a Michelin Pilot Super Sport tyre.

Visually the Rapide’s svelte look has also been worked over. There’s a new carbonfibre bonnet with additional cooling vents for the V12, a front spoiler, rear diffuser and side sills and a lip spoiler for the boot all designed to reduce lift. And the round driving lights in the front PU are similar in design to those fitted to the company’s recent Zagato models.

The naturally aspirated 6-litre V12 has been fitted with the larger inlet manifolds and duel tuned-length inlet runners from the last Vanquish S to improve airflow into the engine, with a new quad exhaust system helping to expel the by-product of producing 595bhp and 456lb ft of torque. There’s also a new engine and gearbox ECU remap, the latter for the latest eight-speed Touchtronic III unit.

Magnificent, and I’m sure to many in the market for such a car, slightly irrelevant due to rear passenger space a 911 owner would scoff at. But seriously, who cares when it is fitted with Aston Martin’s last naturally aspirated V12 engine, which not only wails, screams, shrieks and woffles depending on the angle of your right ankle in relation to the throttle pedal, but also takes you back to a time when exploring every thousand rpm of an engine’s power band was far more exciting than being whacked in the back by a mountain of torque. 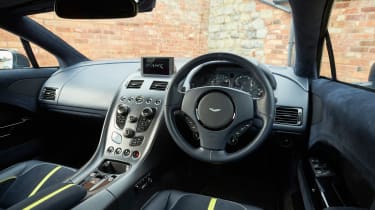 Thankfully the gearbox allows you to manage the V12’s power delivery with none of the vertebrae snapping shenanigans of the Sportshift boxes fitted to Astons in the past with the same motor. And yes, it might drink fuel at a similar rate to a cargo ship burning bunker fuel while sat in the docks, but not a single drop of superunleaded is wasted in the creation of its soundtrack and forward momentum. For an old girl, the Rapide can still put in a turn.

Not only on the straights, either. Because it’s the beneficiary of Aston Martin’s chassis magic that is beginning to dazzle as Matt Becker’s experience and expertise make themselves felt with every new model his team works with – the Rapide AMR behaves closer to the outgoing Vanquish S than it has any right to. On nasty British B-roads that have crests, cambers and crowns that make a Morzine mogul field look like Wimbledon’s centre court, the Rapide AMR doesn’t flinch, flex or run its bell along the surface.

There’s a linear action to every process that you only really notice is missing in the very latest new cars when you drive a car such as the Rapide, which is from a period before electric power steering systems and overly complicated dynamic driving modes. The steering is quicker than you expect, but it allows you to tuck the Rapide’s nose in early, let the body settle (not that there’s a great deal of roll to manage) and then feed in the throttle as the exit makes an appearance. 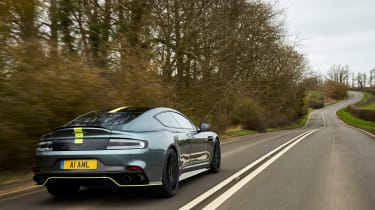 All the while it’s slicing across the countryside it remains remarkably supple, too, with only a hint of aggression to the ride over the last Rapide S we drove. A payoff we’d take for the AMR’s precision and more engaging character.

Some of the interior creaks a bit, but that’s to be expected of a car this age, but beneath you, as you’re sat in the Alcantara-trimmed seat, the Rapide AMR unties every knot presented to it and rushes headlong to the next challenge unabated.

For some, the infotainment system (woeful), the acid green stripes and interior trim and calipers (all optional), and rear space that won’t endear them to any friends or colleagues they shoehorn back there will be enough to send them in the direction of a Porsche Panamera, Mercedes-AMG S63 or wait until Bentley’s new Flying Spur puts in an appearance. Which is understandable as the Rapide has always been an eclectic choice, but now it’s been treated to some AMR magic it’s a choice that hopefully those in the position to make such a decision will take the opportunity to own one of the 210 Rapide AMRs to be built before the opportunity is lost for good.