The Aston Martin Vantage becomes a convertible and gains a paddleshift. Does this new V8 Roadster work? 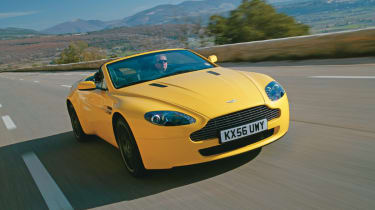 This is a new kind of Aston Martin. It’s open, but it has just two seats and isn’t called a Volante. The V8 Vantage Roadster is clearly based on the V8 coupe, but its suspension is actually stiffer than the closed car’s. That could not have happened if there were worries about structural integrity.

What we’re looking at here, dark glasses shielding our eyes from the livid metallic Sunburst Yellow paint, is Aston Martin’s first proper production sports car. It must be; no open Aston has ever been more taut and focused, visually or dynamically, than this one. The V8 range was designed with an open version in mind, and it shows.

It’s too early in the year for sunflowers, so the Provençale landscape must make do with this Aston Martin for its flashes of yellow. We’ve set off from Gordes, near Avignon, roof down so we can hear the V8’s exhaust bark like never before. It bounces off the walls of buildings before echoing across the valley as we leave the town behind. That’s one of the best things about a roadster – you can hear the car working so much better, especially if its creator is into the aural indulgence of an exhaust bypass valve.

Next impression? We’ve just been over some bumps and ripples and this is one rigid roadster. There really is no structural shake and shudder at all. The figures for torsional stiffness do show a drop from the coupe – 15,500lb ft per degree of twist against 19,900 – but it’s still stiff enough not to make you wish it were stiffer.

It’s also rather more rigid than the DB9 Volante, thanks mainly to the shorter wheelbase but helped by a stronger crossbeam behind the dash. The same beam is also fitted to the latest V8 coupes, so the only Roadster- specific bit of strengthening is in the undertrays, which are of thicker aluminium and attached at more points to perform a structural function not needed in the closed car.

Even if shudder-free, though, a roadster can sometimes suffer in its steering precision as fractional twists in the chassis take the edge off the response. I’ve just driven through a fast, open, downhill mountain bend, and my heart-rate has taken an involuntary blip because the front wheels didn’t bite quite as accurately as I thought they would. I was left in a momentary no-man’s land of threatened understeer, which I don’t think would have happened in the coupe. Did it happen because there’s no roof? It’s hard to say.

Go quickly into a corner and the nose will push wide, and the revvy V8 lacks the torque to counter this by edging the tail out. You can force it into oversteer if you really try, but there’s less natural line-tightening under power than I’d like. The spring rates might play a part here. Their increase is partly to counter the Roadster’s modest weight gain (14kg for the aluminium structure, 80kg overall including the fabric roof), partly because the V8’s engineering chief, Dave King, simply reckons the Roadster feels better this way. And it’s true that the ride is absolutely fine, taut but never agitated.

Perhaps the front springs are a touch too stiff, though, which would also explain why the steering feels less informative than the coupe’s. Yet the rear springs have had a proportionately greater rate increase (17 per cent) than the fronts (14 per cent), and the anti-roll bars haven’t changed. King doesn’t disagree with our observations, but suggests that the Roadster is more likely than the coupe to be driven by buyers less steeped in the finer points of car control. In which case, the small increase in understeer is understandable.

And it really isn’t a big issue because the Roadster’s agility is mostly marvellous if you try to flow with it. You’ll be downshifting copiously to keep the V8 above 4000rpm and in its torque zone (the 380bhp power peak doesn’t arrive until 7000), so the agility is best exploited with the now properly sorted Sportshift gearbox (£3000 extra). It’s lost the surge and shunt of the pre-production system I sampled last December, making this paddleshift-triggered Graziano transmission as good as most of its type, even if it’s ultimately not quite as quick-shifting as a Ferrari 599’s. Even so, I’d still have the manual, because of the physical involvement it gives.

And the roof? Stowed away, it makes for a fabulous-looking Roadster with leather-covered fairings behind each headrest. When raised – fully powered operation is possible at up to 30mph – it looks neat and rounded and seals excellently against wind noise. Aston Martin’s first post-PAG product (it was launched the day after the March 12 sale announcement) is an open car without obvious compromise, and we like it a lot.