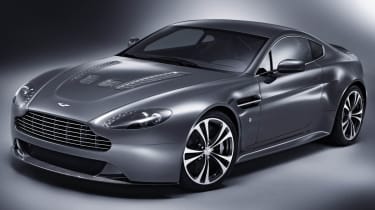 Aston Martin has officially unveiled the new V12 Vantage, and in the company's words it's the most potent Aston ever. That's thanks to a combination of the small platform from the Vantage and the storming six-litre V12 from the Aston Martin DBS.

That means 510bhp at 6500rpm, 420lb ft at 5750rpm and a DBS-matching 4.2sec sprint to 62mph. The V12 Vantage tops out at 190mph, putting it firmly into F430, Gallardo and 997 GT3 territory. The latter is perhaps the best way to think of this new iteration of Vantage, despite the Porsche possessing only half as many cylinders - if the V8 Vantage is to be likened to a 911, this is its more dynamic and hardcore variant.

Carbon ceramic brakes are standard (398mm discs at the front, 360mm rear) and they're wrapped in 19in lightweight forged alloys and Pirelli P Zero Corsa rubber. The tyres have been designed especially for the more powerful Vantage and help it to achieve the highest cornering forces yet from an Aston, with 1.3g possible. The DSC stability control system can also be turned off completely, should you see 1.3g as an achievable target...

There's been a big push on weight saving and weight distribution, too. While the six-litre engine weighs 100kg more than the 4.7-litre V8, the new car's weight rises 50kg thanks to an abundance of lightweight materials and the carbon ceramic brakes which shave 12.5kg alone. The gearbox - six-speed manual only on the V12 – is mounted in a transaxle configuration to aid weight distribution, which is an impressively neutral 51:49, with 85 per cent of the car’s total weight in between the front and rear axles to further help balance.

Looks-wise, the car is visibly beefier than its V8 sibling and largely similar to the RS concept we drove in early 2008. Just 1000 will be made with annual production hemmed-in to 300-500 cars. The production-spec car, pictured here, will be unveiled at next month’s Geneva motor show. Prices are expected to be around £140,000.

While you wait for Geneva, have a read of our in-depth look at the Aston Martin V12 Vantage in evo 128, on sale February 4.