Sadly, our Aston Martin Vantage heads off into the sunset for the last time 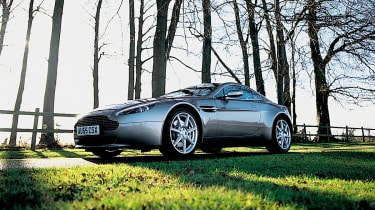 Any Porsche is going to be a hard act to follow, and given that when it arrived toward the end of last year my Aston Martin V8 Vantage followed hot on the heels of a 997S, breaking down twice and being off the road for 24 of its first 31 days with me wasn’t a good start (to put it mildly). I don’t think I’m alone in thinking that £86,000 is a hell of a lot of money to spend on a car, and this was most definitely not what I was expecting for my money.

Neither was the truly inept service that I received from Aston Martin Assist when they handled my first breakdown. Things improved significantly when care of my car passed to the factory and supplying dealer Stratton Motor Company, who were just as brilliant in resolving the car’s problems as they had been in the run-up to its purchase.

So, those problems. It’s probably easiest if I make a little list. Here we go…

December 2005: breakdown which necessitates car being transported to Reg Vardy in Sunderland, where a faulty door relay and dodgy earth strap are discovered to have flattened the battery.

January 2006: car drops into ‘limp-home mode’, which means another transporter trip – this time to the factory. Turns out to have been caused by a failing battery which should have been replaced following the previous breakdown. While at the factory, a fairly long list of niggles and faults that I noticed following delivery are also rectified.

March: driver’s door window refuses to drop when the door is opened. There’s also a worrying howl coming from the engine bay for a few moments following a cold start-up. Lancaster Reading, my nearest dealer, take the car in at short notice, replace a relay and fit a new engine belt.

April: rapid and continuous clicking coming from the passenger door on unlocking the car. Lancaster react with usual speed and replace lock and relay.

June: swap cars with Peter T, who returns the V8 with a broken handle on the inside of the driver’s door (he still loves the car though). A few days later an ‘Emission System Fault’ warning message appears. Lancaster repair the door catch and reboot the oxygen sensor on one cylinder bank.

So that’s two full breakdowns and five further problems, plus the fact that AU55 arrived with a number of shoddy detailing faults. Wholly unacceptable in any car, let alone one at this price and supposed status level.

In view of all this, you could be forgiven for thinking that I was happy to see the Vantage go at the end of June. Not so. You see, somehow owning the Aston always felt like a privilege, an event, and so much more than just owning a car.

And although that feeling is helped by nice touches like the invite I received from Lancaster to spend a day at the Royal Berks Shooting School (where my nephew Tom and I enjoyed blasting a few clays out of the sky), it mainly comes from the car itself. I never once just got in the Vantage and drove off. There was always time to have at least a quick look at its fabulous lines and, once inside, to inhale the aroma of expensive leather and admire the myriad of design touches.

The Aston wasn’t all about looks, though – it was a joy to drive, too. The seats were as good to sit in as to look at and, combined with the high centre tunnel, put you in a low, cocooned driving position. Way, way more of an event than my 997 before even hitting the starter button. Ah yes, the starter button. Gateway to heaven. The initial crackle of start-up and the burble at idle were good, but it was when the exhaust’s trick valve opened at 4500rpm and the car seemed to become totally unsilenced that the fun really started. It was always hard to resist dropping down a gear or two through tunnels or near high walls.

It was good to be back in a front-engined, rear-drive car again. After the 997 I did initially wonder where all the traction had gone – especially in the wet – but a quick adjustment of driving style soon revealed how much fun could be extracted from the Aston’s chassis.

The Vantage did have, to my eyes, one incredibly naff feature. After turning on the ignition, the info screen in the driver’s binnacle initially flashed up a nice AM badge, but then insisted on scrolling through the words ‘Power’, ‘Beauty’ and ‘Soul’. Good grief! A car with a mission statement!

So how best to sum up my Aston experience? Well, I may own ‘better’ cars in the future, and I’ll certainly own more powerful, faster ones, yet despite all the problems, when I try to think of a way to describe how I feel about having owned this car I keep coming back to one word: ‘privileged’.

When asked what car you own, answering ‘Porsche’ usually gets a positive if controlled response, saying ‘Ferrari’ may even get a ‘Wow!’, but ‘Aston’ always got a surprised and approving ‘Really?’, usually followed by lots of questions. Enthusiasm for the marque seems to be huge.

Perhaps it’s this enthusiasm that has caused my car’s faults to have faded in my memory. I remember it fondly every time I walk across the empty space in my garage. There’s one more hard-headed reason for my positive feelings. Before I’d even bought the car, I had pre-sold it, and it has just gone to its new owner at list price. That’s a pretty good seven months’ depreciation-free motoring in my book!