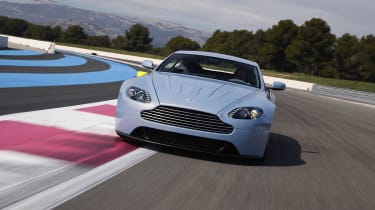 The speed trap never lies, at least not the one placed just before the braking area at the end of Paul Ricard’s legendary Mistral Straight. At more than a mile in length it’s the longest permanent straight at any European circuit, and given you join it via a fast left-hander you don’t need an especially vivid imagination to picture the gear-stretching potential of this epic arrow of asphalt.

Aston Martin has invited us to Ricard – now established as one of the finest testing facilities in the world thanks to investment from a certain B Ecclestone Esq – for the marque’s now-traditional pre-season gathering of its works and semi-works race teams. It’s a mouth-watering collection that includes the newly Gulf-liveried DBR9 GT1 racers, Aston Martin Racing’s V8 Vantage GT2 development car and a sinister-looking Aston-powered LMP1 sports prototype, yet the car that seems to be attracting more admiring glances than any other is the one we’ve come here to drive: the monstrous, V12-engined Vantage RS Concept.

Take a look at the timing screens in each and every pit garage and it’s obvious why: despite being the only non-race car present it is consistently outrunning the V8 Vantage N24s, the GT3 DBRS9s and the AMR Vantage GT2. More impressively, its 175mph peak is identical to that of the GT1 DBR9. Indeed, only the dart-like LMP1 car is quicker, reaching a searing 188mph through the trap.

As we all know, there’s more to life than straight-line ballistics, but there’s something particularly gratifying about seeing the RS Concept deliver on its compelling promise of fist-tight dimensions and a super-size engine. Given it was plucked straight from Aston’s Geneva motor show stand after its Press Day debut and trucked overnight to Paul Ricard, it’s also clear that, despite enjoying only the bare minimum of development work, it’s rather more than your average concept vehicle.

Perhaps the biggest compliment you can pay the RS Concept is that you’d never guess it’s a one-off built in just four months of frenzied activity. The fit and finish are exemplary, from the beautifully perforated carbonfibre bonnet and sharp-edged sills, right through to the V12 installation itself. Inside, the swathes of Alcantara and swoops of carbon create a suitably classy balance of purpose and opulence that distances it from the stripped-out sparseness of Ferrari’s 430 Scuderia and the more mass-produced ambience of Porsche’s 911 GT3.

Even by Aston’s exuberant standards the RS Concept starts with a bang, erupting with a savage flare of revs before settling down to a fast, crackling idle. Donated by a DBRS9 GT3 racer, the 5.9-litre V12 has been dry-sumped to increase ground clearance and to allow the oil tank to be located in the rear luggage compartment in an effort to restore balance to the weight distribution. Free from the air-restrictors that GT3 regulations demand, the engine can breathe more freely, resulting in a rude 600bhp. Thanks to extensive use of carbonfibre bringing the RS Concept’s weight down close to 1500kg – significantly less than the 1630kg V8 Vantage, despite the heavier engine – its power-to-weight ratio is around the 400bhp/ton mark…

No traction control translates into tortured Pirelli P Zero Corsas with every twitch of your right foot. Before the tyres reach operating temperature the rear wheels spin in any gear below fifth, but once they’re hot you’re safe to floor it in third. As you’d expect, the acceleration is rampant, to the extent that when a GT3 or GT2 racer appears in the mirrors on the straight you have to lift-off completely for them to stand a chance of passing. If this car doesn’t top 200mph I’ll eat my Arai.

Far more surprising is the way the RS tackles the circuit’s numerous technical turns. Where I’d expect to experience nose-heavy understeer the RS peels towards the apex with enthusiasm. Keep the throttle steady and the tail feels poised too, with plenty of grip and decent control whether you’re on a trailing throttle or braking into the heart of the corner.

It goes without saying that in addition to the steering wheel you can also guide the RS with your right foot. With such a surfeit of grunt over grip it’ll slide through pretty much any corner – great fun if you’re not paying for the tyres, but even driven with more restraint it’s refreshing to experience a powerful car that demands you treat the throttle pedal with respect.

The throttle map is pretty raw, which makes powering out of corners a rather binary affair. This puts the tyres and chassis under additional pressure, but as long as you’re quick with your corrective lock and confident with your throttle inputs the RS is remarkably driveable on and over the limit. Yes it feels a bit soft for the rigours of Paul Ricard, but as it isn’t intended to be a track car, that bodes well for on-road manners. Much against expectations, this Frankenstein’s monster of a car looks likely to handle sweetly once the development miles begin in earnest.

Interest in the RS is strong enough to make production a certainty. Whether it makes the transition from concept to production with its animalistic character intact is something that’s being debated by the boys at Gaydon right now. I for one hope it retains both bark and bite.