With the Vulcan making headlines, we've been tempted by one of Aston Martin's best cars of recent years 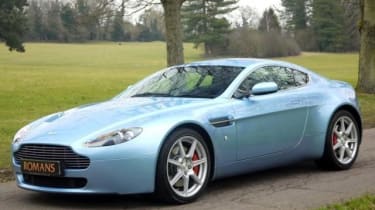 Has there been a more successful interpretation of Aston Martin’s family look than the V8 Vantage, launched in 2005?

You might say the original Vanquish, but the subsequent DB9 made that car look a little heavy-handed. The DB9 itself is beautiful, but less dazzling now than it was when it debuted in 2004. The Vantage also makes it look a little soft.

The DBS was an improvement, but lost the DB9’s purity. The new Vanquish is also attractive, but by now, haven’t we seen it all before? If anything gets close to the V8 Vantage it’s the V12, but the scoops and vents are offputting for some.

But no, the V8 Vantage has it all. It’s pretty, but the short wheelbase and stubby rump give it a squat stance, hinting at the power within. It also avoids needless aesthetic tinsel – the grille is simple, and there’s no bodykit to spoil the purity. Little wonder the V8 was chosen to underpin James Bond’s new Aston Martin DB10 – perhaps the purest Aston Martin design since the Vantage itself.

That the V8 Vantage is now conspicuously good value makes it even more appealing. 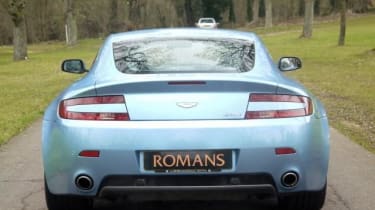 We found this £34,995 example for sale at Romans in St. Albans, through Classic and Performance Car. It’s covered a modest 55,000 miles since 2007, and looks attractive in its coat of Glacier Blue paintwork. Darker colours tend to work better on Aston Martins, but the Vantage seems more accommodating of lighter shades.

Little detail is given in the advert to the car’s service history, but remember that this was a £79,995 car when new, and maintenance is vital. We covered the V8 Vantage in our buying guide in issue 198 – engines are generally solid, but clutches are pricey at £2500 fitted by Aston Martin Works, and dying batteries can be troublesome.

There’s plenty to like about the way Vantages drive though, from the 380bhp, 4281cc V8, to the six-speed manual – as fitted to this car. The black leather interior on this example also looks fantastic.

Aston Martin is undergoing a transition phase, partnering with AMG and launching stunning hypercars like the Vulcan. The future looks bright, but there’s a lot to like about the company’s past products, too.