Zagatos are rarer and more exotic than regular Astons, but they also tend to be real drivers’ cars. This is no exception 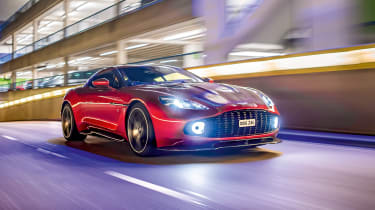 When the salubrious but somewhat static surroundings of a concours d’élégance are chosen for the world premiere of a new car, it is easy to jump to conclusions. In the same way that you don’t look to the catwalks of Milan when considering which pair of walking boots will best deliver you to the top of Snowdon, it would be easy to dismiss a car with the sensational styling of the Vanquish Zagato as probably being a bit rubbish for a run up the Llanberis Pass.

Zagatos, however, should never be discounted quite so quickly. Many of the company’s early cars had racing at their heart, and indeed the almost-trademark ‘double bubble’ roof was born from the necessity of fitting helmeted driver and co-driver into the confines of small Italian competition cars. Closer to home, the iconic DB4 GT Zagato was much more than just a styling exercise. Lighter, more aerodynamic and more powerful than the standard car, it heightened the performance as well as the panache.

So no one should be surprised to hear that the Vanquish Zagato is a fantastic car to drive as well as to coo over. Of course, it is built on a very good base, given that it is essentially a Vanquish S underneath, but nonetheless it is very pleasing to find that it is such a deeply enjoyable experience being behind the wheel. This is not a discovery that creeps up on you slowly either. From the first meandering mile, this is a car that delivers all the sensations that we instinctively look for. 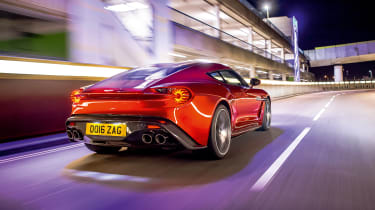 The ride is firm but not frantic (providing you keep the adaptive dampers away from Race mode) and combined with steering that is beautifully well-weighted and responsive, so that it seems alive even around the straight- ahead, the car communicates at all speeds. This in turn gives you confidence, as you feel instinctively in touch with how the weight is shifting and the balance altering. It’s almost as though the suspension has all been rose- jointed, such is the sense of connection with how the sidewalls of the tyres are loading up.

While the suspension is slightly firmer than that of a Vanquish S, the engine is identical, the all-alloy, quad-cam, 5.9-litre V12 pushing out 595bhp and 465lb ft of torque. It feels more than ample, though, and the sound from this naturally aspirated engine is gloriously raucous. In the same way that the suspension is probably just a touch too firm to be signed-off on a regular production Aston, so the exhaust is nicely louder than the factory would get away with in normal circumstances. Perfect, in other words.

If there is one part of the package that doesn’t quite live up to the rest, it’s the Touchtronic III eight-speed auto. It’s not bad and it doesn’t blight the experience by any means, but it just takes a while to adjust to the shifts, which lack the snap and smoothness (depending on the situation) of the best.

Of course, the Zagato’s striking looks can’t be ignored, and the thrill of driving around in something that pleases you when you first walk up to it is undeniable. A Ssangyong Turismo could be the greatest drivers’ car ever produced, but it wouldn’t make your heart skip a beat in anything other than mildly startled revulsion when you opened the garage door. 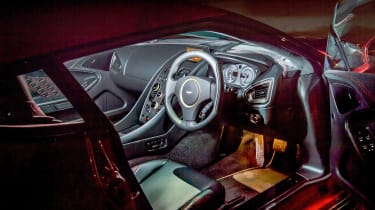 The Zagato has many good angles (and a couple of slightly quirky ones) but the rear three-quarter view is one I could gaze at for hours. Look closely and you’ll notice the lack of split lines in the bodywork, with a terrifyingly large one-piece carbonfibre clamshell making up the rear of the car. The way the afterburner lights appear to have almost melted away the sharp shapes of the skin around them is endlessly fascinating. At the front, the bonnet dips into the characteristic, slightly bulbous nose, while the windscreen and side glass are a curious mix of wraparound curviness and abrupt, almost awkward angles. Overall it may not be to all tastes, but what’s undeniable is that it works to dramatic effect.

Inside, this particular car – number 16 of just 99 coupes built – has been treated to some extra stitching in the headlining, the Z motif matching that sewn onto the seats. I’m glad that it’s been specced without the slightly gaudy gold exterior highlights of the optional Villa d’Este pack though. There are a few hints of gold on the switchgear, but they are subtle enough to be acceptable.

The Vanquish Zagato has a list price of around £525,000 – admittedly a lot of money for a car that drives largely the same as the regular, £199,950 Vanquish S – and some reports say they’ve already doubled in value due to its sold-out status. As you can tell from the photos, I drove this car at night. I also drove it on roads that I didn’t know. At least it wasn’t raining but, all things considered, it wasn’t the sort of situation to be rolling up sleeves and exploring limits. Yet, that’s just what I found myself being drawn into doing. 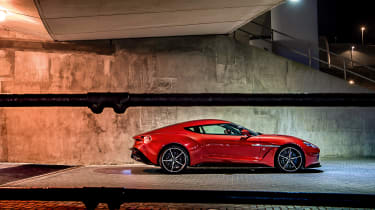 With all the right sensations oozing out of the square-sided steering wheel and the front-mid-engined layout inspiring instinctive confidence, it just felt like the sort of car that wanted to be driven harder and harder. There was no threshold of uncertainty to overcome, no step into the unknown to make, it just felt wonderfully balanced and natural. It also seemed much smaller than any other Vanquish I’ve driven, the long bonnet easier to place when threading down a hedge-lined lane or jinking through the small chicane of a roundabout. Lights ablaze, V12 louder because of the stillness of the night, it made me think that a Vanquish Zagato really ought to find its way onto the grid of some sort of endurance race. It would be fitting for such a car.

Someone told me the other day that – much to their amazement – they had now seen three Vanquish Zagatos on the road. The model would indeed seem ripe for seclusion in the sterile surroundings of speculative car collections. But after my own time behind the wheel of one, I can see why they are being used so much, why this one has already seen switchbacks in Switzerland. They’re too good to salt away. I shall look at concours launches with renewed hope in future. Even if I don’t expect to see too much Versace on the Eiger.