Electric Audi e-tron Gran Turismo due in 2020 - could this be the new Audi R8? 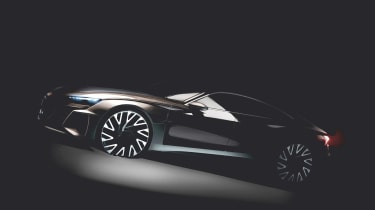 Audi has chosen its Annual Press Conference in Ingolstadt to announce that a new Audi e-tron Gran Turismo 4-door coupe is in the works. The all-electric machine is destined to form a 'sporty spearhead' for the marque’s e-tron plug-in car range and could point to a restructuring at the top of the Audi Sport performance car line-up. It will hit the streets in 2020.

Mixed in to a slightly less engaging cocktail of 2017 financial results, the new car announcement came as a surprise and was accompanied by a shadowy teaser sketch revealing the new car’s aggressive front end and swooping roof line.

The design is expected to be inspired by the recently unveiled Audi e-tron SUV concept with the trademark wide Audi grille and the rear strip lighting that’s already being rolled out to the firm's higher-end production cars. The sketch also reveals that classic GT car proportions have been adopted, despite the EV powertrain beneath, with a prodigiously long bonnet and the roofline descending to a squat, powerful tail.

The interior will doubtless be built around Audi’s Virtual Cockpit display, as well as the dual-screen infotainment system from the A8.

Audi describes the new sports EV as 'highly dynamic' and using 'purely electric drive'. It’ll be the first Audi Sport model to get the e-tron electric drive technology but it’s unlikely to be the last as hybid and pure electric play an increasing role in the make-up of performance cars in the next decade.

Speaking about the new GT, Rupert Stadler, Audi Chairman of the Board, said: 'We interpret sportiness very progressively with our fully electric e-tron GT. This is how we will take our high-performance brand Audi Sport into the future.'

The Audi e-tron Gran Turismo is set to be built at Audi’s Bollinger Hofe site, 240km to the west of Ingolstadt. The car will form part of an Audi e-tron portfolio that will span more than 20 models by 2025, at which point the brand hopes that its EV and PHEV models will account for one third of sales.

The car could also point to a change in strategy for Audi and the wider Volkswagen Group with the Gran Turismo effectively replacing the Audi R8, the brand’s current flagship sports car, to leave more room for the Lamborghini Huracan to breathe in the supercar market. Audi has already hinted that the R8 will not get a direct replacement and the e-tron GT could take it in a new direction with an Audi Sport flagship facing-off against the Porsche Mission E, another pure-electric 4-door that's likely to use the same platform and technology.

We may know more about the new GT on April 9th with the makers of the Gran Turismo driving game having already teased a new Audi Sport e-tron car that's set to appear in the game. The car silhouette in the teaser image seems to have different proportions to the on in the Audi sketch but could be a virtual racing version of the e-tron Gran Turismo. We'll bring you more when we have it.