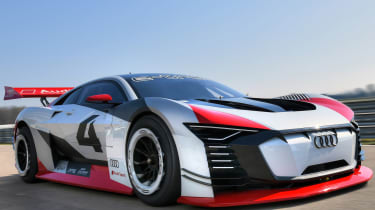 We’ve seen plenty of ‘virtual’ Gran Turismo vision concepts from manufacturers before, but this one is a little different. Rather than being just a digital or static concept, Audi’s e-tron Vision Gran Turismo will not only function, but also serve as the Formula E’s ‘race taxi’ in races across Europe. It seems the race taxi role will involve parading around the circuit before races flying the flag for Audi and it’s e-tron range.

A major part of Audi’s growing promotional effort for its all-electric e-tron brand, the e-tron Vision Gran Turismo is powered by three electric motors, each producing 200kW (267bhp) for a sum total of 600kW (802bhp). Two of the motors are located on the rear axle, the third on the front, giving the e-tron quattro all-wheel drive, albeit from a slightly different method to other Audi Quattro systems. Weighing 1450kg, the concept car has a power-to-weight ratio of 553bhp/tonne.

The car was designed under the watchful eye of Audi chief designer Marc Lichte and Audi’s design team used the Audi 90 Quattro IMSA GTO race car from the late 1980s as a source of inspiration. More than just being a design indulgenc, however, the e-tron Vision Gran Turismo might give us an insight into the future of Audi design - specifically that to be used on Audi’s second bespoke e-tron production model, the ‘GT’ that’s due to reach showrooms in 2020. 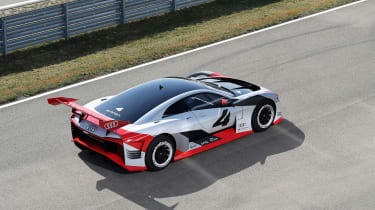 Design elements fostered under the stewardship of Marc Lichte, such as the accentuated haunches over the wheels and six-sided grille graphic are present, albeit in a more exaggerated form compared to his other road cars.

The concept will be launched at the upcoming Italian round of Formula E later this month, and it will attend all the European rounds of the Formula E championship as well as other promotional events.