Audi reveals its segment straddling A5 Sportback in production form 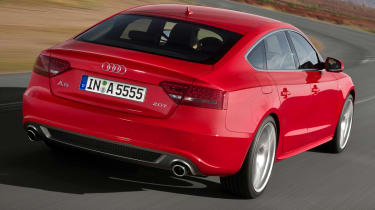 Audi’s latest niche-busting model has been revealed. The A5 Sportback has been drip-fed to us via teaser shots, but is now revealed in all its glory.

And it looks pretty much how you’d imagine it to – a smart five-door version of the handsome A5 coupe, with barely a line out of place. The result doesn’t look too indifferent to an Audi A4, though…

The Sportback differs from an A4 saloon with its four frameless doors and a 36mm lower roofline, while its hatchback rear opens up to a load space not far off an estate A4 Avant. It aims for a more luxury feel with its four seats and svelte styling, though.

There’s a host of typically Germanic technology on offer, too, with Audi drive select, active shock absorber control and dynamic steering among the options.

Sales begin this October, with prices ranging from £25,440 for a standard trim 2-litre TDI to £36,220 for the 3-litre TDI in S line spec. No word on potential S5 or RS5 Sportbacks, but with Audi clearly trying to out-niche its key German foes, don’t rule either out.