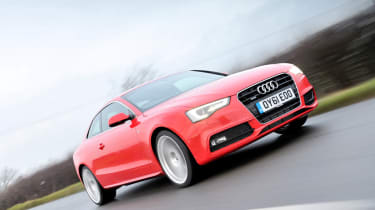 This Audi A5 3.0 TDI Quattro S-Line is a mildly refreshed version of Audi’s handsome four-seat coupe, with the usual mid-term tweaks – revised lights, boosted spec and marginal improvements in both power and economy for this. We’re testing the 3-litre TDI S-Line diesel which – apart from the S5 and RS5 – is the quickest car in the range.

The A5 gets a mildly retuned version of the established 3-litre V6 engine. Power goes up by 5bhp, to an impressive 242bhp. But the car’s defining numbers are its torque figures and economy – with the peak 368lb ft of twist available from just 1400rpm and the official combined economy figure going up to 49.6mpg. Considering the A5 also boasts a 5.8-second 0-62mph time, and will keep accelerating until the electronic limiter calls time at 155mph, that’s pretty impressive.

As before, the 3-litre V6 TDI is available in two states of tune. This is the more powerful version, which is only available with both Audi’s Quattro four-wheel drive system and a seven-speed DSG twin-clutch gearbox. Buyers can also pick a less powerful front-wheel drive version with 202bhp and the slushier ‘Multitronic’ CVT gearbox.

As before, the big diesel engine suits the A5’s relaxed dynamic demeanor pretty well – this is one of those car it’s possible to make effortless and extremely rapid progress in without either driver or car breaking sweat.

The DSG gearbox works extremely well, giving a decent impression of a conventional automatic under gentle use while seamlessly swapping between its seven ratios, but offering near-instant changes when driven a bit more keenly – or when over-ridden with wither the push-pull gear selector or (optional) steering wheel paddles.

The big V6 never leaves you in any doubt that it’s using compression rather than sparks to ignite its fuel mix, but the noise it produces is a muscular multi-cylinder hum rather than the sort of industrial sounds you’d more typically associate with a diesel. The engine in equally happy to be driven on either its low-down torque, or to rev out to the 4500rpm point at which peak power arrives. Drive it hard and it’s properly quick with overtaking punch to rival some proper exotica.

Our test car came with the sports differential (a £620 option) which improves cornering response by vectoring torque to the outside rear wheel, and which can be felt helping to push the A5 around sharper turns. It works reasonably well, but as before, the dynamic weak link remains the steering, which suffers from feel-free assistance.

Depends where you’re priorities lie. The BMW 330d M-Sport Coupe is almost identically priced, and the Audi certainly gives it a tough challenge. The A5 is quicker, more economical and has an extra pair of driven wheels – but the BMW is still the more dynamically focused choice.

We managed 35mpg in rapid, real-world driving – with gentle use getting the trip computer north of 40mpg.