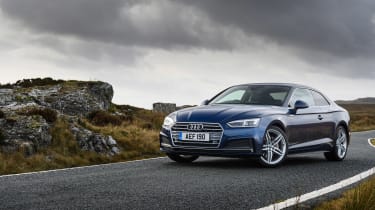 The Audi A5 has been tidied up since the first-generation model launched, and it’s now much more palatable as a standalone model – rather than simply feeling like a less practical A4. It’s a handsome and beautifully finished car, incorporating the best features of any Audi – including an interior which is built as well as any top-end luxury model.

The standard A5 makes a lot of sense as a practical daily runabout, too. With space in the rear for adults (at a push) and a decent-sized boot, it makes a compelling case as a more stylish alternative to a standard saloon. Add to that a range of efficient and powerful petrol and diesel engines and you may be able to persuade your fleet manager to let you have one over an ordinary saloon.

If you want more performance and driving thrills, you can step up to the S5 or even the halo RS5 – while those after five-door hatchback practicality can plump for the A5 Sportback. 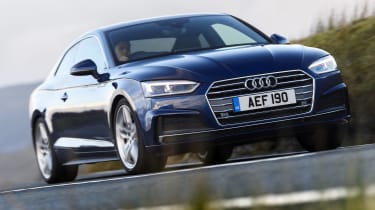 > Performance and 0-60 time: No A5 is particularly slow, and the entry-level diesel can sprint to 60 in under eight seconds

> Ride and handling: Active chassis is really necessary for any meaningful feedback or engagement

> MPG and running costs: The A5 is more efficient than ever before – choose the Ultra diesel to really cut costs

> Interior and tech: Audi’s legendary build quality mates with the same upmarket design as the A4 saloon, while tech and equipment levels are strong

> Design: Though it looks very similar to the outgoing model, that’s no bad thing, and the A5’s sleek silhouette is appealing

The higher-powered petrol and 3.0-litre diesel are available exclusively with Audi’s s tronic dual-clutch automatic gearbox, while the Ultra diesel and lower-powered petrol come with a choice of automatic or six-speed manual gearboxes. 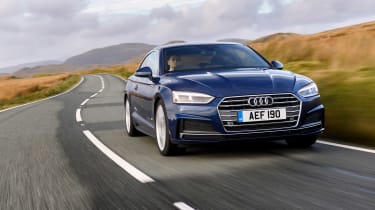 Trims run entry-level SE through Sport and finally range-topping S line. This purports to offer some of the spirit found in the S5 and halo RS5, with a bodykit, sports suspension and larger, 18-inch wheels, but other than that it’s purely a styling exercise. All cars come with LED daytime running lights, heated front seats, Audi’s MMI infotainment system and keyless start, but you might want to step up the trim levels or scour the options list for full LED headlights, sat-nav and electrically adjustable seats.

The A5 has several key rivals in the mid-sized coupe market, going head-to-head with cars like the Mercedes C-class Coupe, Lexus RC and BMW 4-series. Of these, it’s the 4-series that’s likely to nab sales from keen drivers, thanks to its rear-drive powertrain. It’s priced similarly, too, starting from £30,260 for a 420i petrol model. The Mercedes kicks off at £31,585 while the Lexus – which will appeal to those who want something a little different – is more expensive, at £36,495.