Audi A8 review - the world's leading limo? - Audi A8 engine and gearbox

Slightly indecisive? Good news, because you currently have a choice of only two powertrains in the A8. Both displace three litres and both are V6s, with one being powered by diesel and the other using petrol. Nice and straightforward.

Well, not as straightforward as it might have been given Audi now calls them the 50 TDI and 55 TFSI, but that’s why we’re here. The 50 TDI produces 282bhp at 3750rpm and sends 443lb ft of torque (at 1250rpm) to all four wheels via an eight-speed tiptronic automatic, while the 55 TFSI develops 335bhp at 5000rpm and 369lb ft from a low 1370rpm, also sending its power through an eight-speed auto to Audi’s quattro all-wheel drive setup. 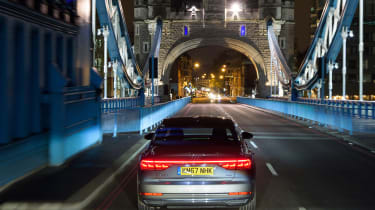 Both use mild hybrid technology. Audi’s take on the tech involves a 48-volt electrical system and a belt-driven starter-alternator, with the ability not just to start and stop the engine, but also cut it on the move for engine-off coasting, and energy recuperation under deceleration.

The benefits look bigger in practice than the fairly meagre 0.7-litre cut in consumption (0.15 gallons) every 62 miles suggests. It works out at around 80 miles of the A8 50 TDI’s theoretical 900-mile range on an 82 litre/18 gallon fill. Not bad for the fuel light bingo enthusiasts among us...