Audi A8 review - the world's leading limo? - Audi A8 design

You won’t need to be an ardent car-spotter to recognise this new car as an A8, even if you might need a little more skill to discern it from the model it replaces. In other words, it looks like a big Audi saloon, neither original nor particularly offensive, even if the new car’s front grille has grown to comically large proportions.

Current Audi design trends mean the company hasn’t been able to resist fiddling and tweaking individual panels and the result is a slightly busier shape than before, but by the standards of its closest rivals - the BMW 7-series, Mercedes-Benz S-class and Lexus LS, the Audi is fairly understated. 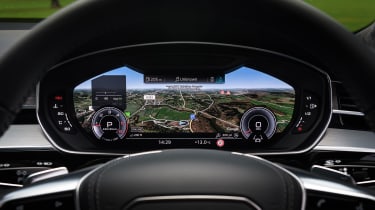 The exception is that new rear light setup and the Blackpool Illuminations impression it does when you unlock the car, but given it was Audi that started the trend for LED daytime running lights in the last few decades, you can bet that others will adopt the Christmas tree effect too, so you’d better get used to it.

The A8 remains a primarily aluminium car, but Audi has also increased use of high-strength steels, magnesium and carbonfibre too. Body strength and torsional rigidity have increased as a result and the body itself is physically lighter than it was before, but the influx of new kit means the A8 as a whole is nearly 100kg heavier than the car it replaces.