Until Audi produces an S8 or reverses its decision not to drop the W12 engine into the car, the 55 TFSI will remain the quickest A8 in a straight line sprint. With little fuss and only slightly less noise the petrol V6 will carry the A8 to 62mph in 5.6 seconds from rest, with the long wheelbase version of the same just a tenth slower. Top speed is limited to 155mph.

The diesel isn’t far behind - 0-62mph takes 5.9 seconds here and in contrast to the petrol, there’s no on-paper performance deficit for long wheelbase models. Top speed is, once again, limited to 155mph.

True to the luxury car brief, neither engine feels particularly stressed in its near two-tonne cage. Both the petrol and diesel remain relatively hushed however hard they’re worked - audible certainly, but not concerningly so - and the petrol in particular almost sounds like it’s doing its job in a neighbouring car. Performance is strong too, and you’ll only be left wanting more if you’re exploring the very top of the rev range in each; there’s a hint of breathlessness that admittedly might disappear once the engines are run in. 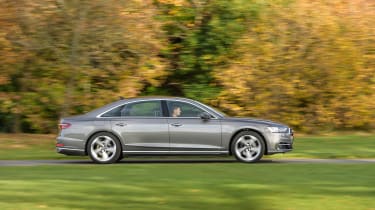 The petrol’s silken responses make it the more appealing of the duo and there’s a linearity to the performance that makes it easy to access without ever promising actual excitement. The diesel is hardly rowdy but Mercedes’ recent introduction of inline-six diesels (and BMW’s continued use of them) show that a V6 like Audi’s will never quite compete on refinement.

With both units delivering their maximum torque figures from little over 1000rpm, there’s effectively no penalty in lolling around at low revs and driving on the torque, but switch to Dynamic mode and both engines seem to work even harder in their mid-ranges with a welcome improvement in throttle response. Few owners will regularly use the gearchange paddles on the back of the steering wheel, but they do make it even easier to access the deepest reserves of urge, and react quickly enough to your gearchange demands.